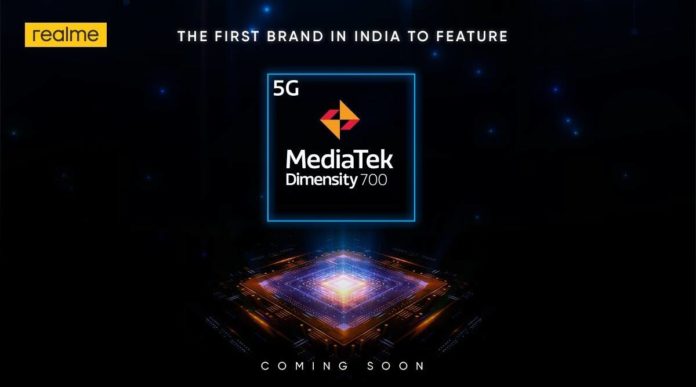 MediaTek Dimensity 700 chipset is an octa-core processor, clocked at 2.2GHz, and based on a 7nm fabrication process, which is claimed to offer 28-percent more efficiency as compared to the 8nm process. It features two ARM Cortex-A76 Big cores, clocked at a maximum frequency of 2.2GHz, and six ARM Cortex-A55 cores clocked at up to 2GHz. In addition to this, the SoC supports up to 12GB of LPDDR4X RAM at a frequency of 2,133MHz and UFS 2.2 internal storage. The chipset also comes with an ARM Mail-G57 MC2 GPU that is clocked at a maximum frequency of 950MHz. MediaTek has supplied the Dimensity 700 with ISP(Image Signal Processor) that is capable to support either two 16MP sensors or a single 64MP sensor. It is also capable of 3D noise reduction, AI enhancements, and Depth Engine. It can shoot 2K videos at 30fps.

During the event, MediaTek announced that Realme will be the first company to feature Dimensity 700 chipset in its upcoming mobile phone. Realme India Head Madhav Sheth also announced the collaboration via Twitter.

Another first from #realme!

We will be the first brand in India to offer the MediaTek Dimensity 700 5G Processor in our upcoming smartphone!

Can you guess which one will it be? pic.twitter.com/aH6xm8khcX

Madhav has confirmed that the 5G variant of the Realme 8 will definitely launch in India. A few days back, an official promo for the Thailand launch of the same was spotted. It is expected that Realme 8 5G will be the first smartphone to be powered by MediaTek Dimensity 700 5G chipset.

Moreover, a dedicated page on Flipkart has gone live that confirms a 5G smartphone from Realme. But, the page does not particularly mention Realme 8 5G. These are speculations and we have to wait for the official statement from Realme.