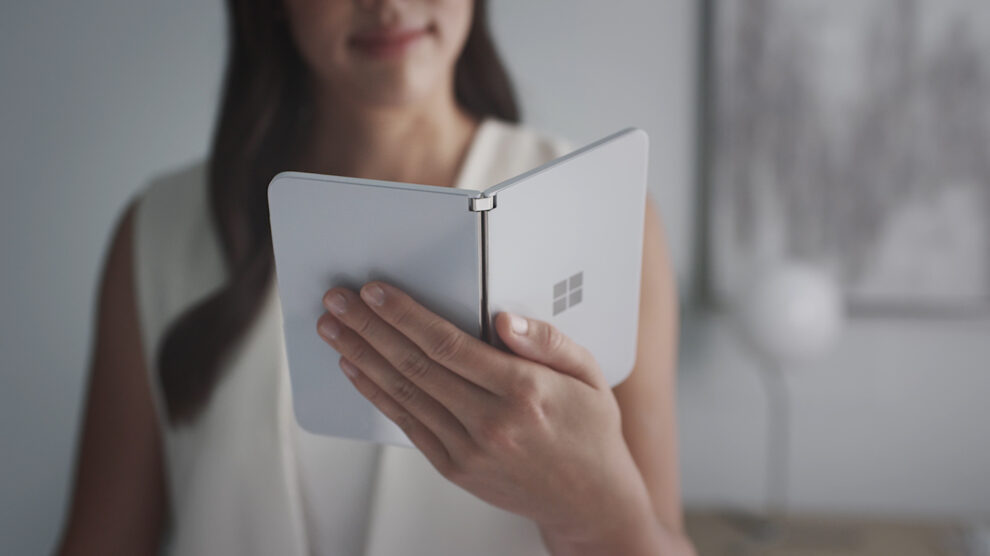 Last October Microsoft announced Surface Neo and Surface Duo. These devices were meant to be launched in the holiday season of 2020 but surprisingly Surface Duo has been released today

We had seen some leaks on AT&T website of the Surface Duo device and expected it to launch soon. So the time is here. Let’s have a look at its feature and specifications.

There are two models, the unlock model and the AT&T model. The difference is the first one contains a slot for a sim card.

Now moving onto design and display, This device has two 1080p PixelSense AMOLED displays. They both come with a 4:3 aspect ratio and 1800×1350 pixel resolution each. Both screens are very well-calibrated.

The displays support Microsoft Active Pens, so you can use any of the recent Surface Pens on them.

Well, you won’t get the sleek and stylish bezels. But the device is extremely thin. Even when it is folded it’s thickness is quite good. Talking about numbers, It’s width is 4.8mm while unfolded and 9.9mm while folded.

The Surface Duo is a very adaptive device. On the Surface Duo, you can fold the display 360 degrees.  It also uses watch mechanics lock into place, so you can fold it half-way like a laptop or into a tent shape for watching something like Netflix or YouTube.

Microsoft has made this device a dual-screen because they feel users buying this will have a great advantage over other Android or iOS users when it comes to working efficiently. You don’t have to keep on closing your apps for switching from one to another. You have the comfort of two screens so you can easily drag things from one screen to another or work simultaneously on two tasks.

Microsoft has adapted its Office Suite and One Drive to span across the device, and some third-party apps like Amazon Kindle can mimic a book-like reading interface to take advantage of the dual-screen design. The android apps will also function on this device. They won’t be able to take advantage of this innovative screen though.

Microsoft is releasing APIs for dual-screen apps to work in the Android codebase, and it plans to upstream them for other manufacturers and third parties to use.

Now moving onto some internal features, you will get Qualcomm Snapdragon 855 powerhouse which is optimized for dual-screen. You have two choices for storage 128GB or 256GB. Talking about RAM you get 6 gigs of it. The battery is not so impressive as it comes with a 3755 mAh (typical) dual battery. It supports fast charging with an 18 V fast charger.

It is not your Camera phone so it won’t have those amazing camera qualities. You get an 11mp camera. You can shoot Up to 4K 60fps with EIS though.

You also get a fingerprint reader and an in-built Microsoft Authenticator to keep your device safe. Talking about the pens it supports, You can use Surface Slim Pen, Surface Pen, and Surface Hub 2 Pen.

Microsoft has clearly stated that this device is not for everyone. It is for the Surface fans and those who want to work more efficiently. This is a proper productivity device rather than a flamboyant and stylish android device which has a 90Hz refresh rate and crystal clear camera quality. Microsoft knows whom they have to sell and how they have to sell. The only downside I feel is the price. Microsoft’s product always comes at a premium price. The 1400 dollar tag seems a bit high but maybe for the Surface fanboys, this would be affordable and reasonable.

Microsoft has decided not to provide any pre-order bonuses with the device, but you do get a bumper cover in the box.