Motorola just released the next generation of its Moto G lineup on Flipkart at 12 pm today. This generation will follow its previous generation’s moniker and will be called the Moto G9. It will be available for sale from the 31st of August on Flipkart. Check out the prices and specifications down below.

The Moto G9 will be coming in two colors ‘Forest Green’ and ‘Sapphire Blue’. This will be Motorola’s Budget offering, coming in at 11,499 Rs. with a massive 5000mAh battery, 48MP triple camera setup.

Moto G9 will be coming in the box with Android 10 and has a confirmed update to Android 11. This new Motorola G9 will also follow the steps of its predecessors in delivering a near-stock Android experience. With little to no bloatware and a few special moto gestures sprinkled on top which make the experience even better. 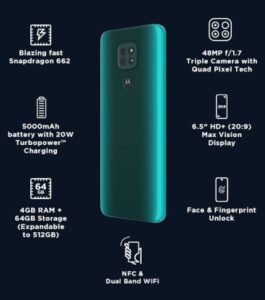 Motorola was often referred to as the budget king for its reliability, software updates, and near-stock software experience which is almost nonexistent in this price range. With Motorola receiving a lot of praise, for this reason, from reviewers as well as consumers until 2018. Where there were many other companies releasing phones with better specifications.

The Moto One Fusion + released this June was Motorola’s comeback after these 2 long years. Motorola yelled that it is back and will take over the budget and Mid-Range scenario again and was the first step to its goal. After which it released it’s Moto G 5G one of the first 5G phones under a 30 thousand price range.

With this newly released G9, Motorola is revamping its original carrier for success in the Smartphone market. 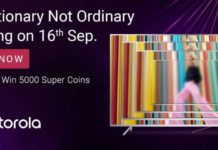