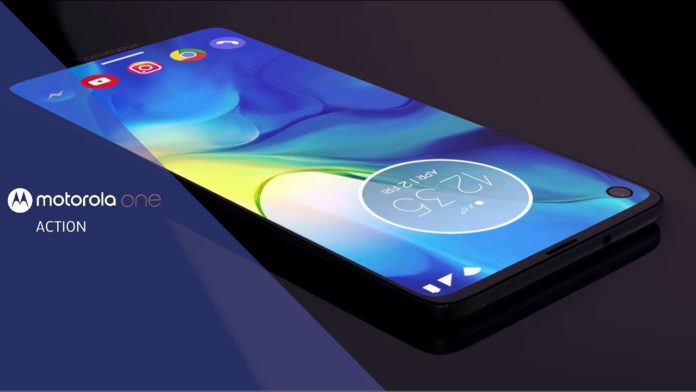 The Lenovo-owned company Motorola to launch the Motorola One Action device on August 23, 2019. According to Amazon Germany listing, we know that Motorola One Action will sport a hole-punch display with 21:9 aspect ratio and 1080×2520 pixels resolution. The display size was earlier revealed to be 6.3-inch by the Android Enterprise Directory listing.

It is likely to be paired with an ultra-wide-angle lens and a depth sensor. At the moment, information regarding the other two snappers is still under wraps. On the front, the Lenovo-owned company might add a 12.6-megapixel shooter for capturing selfies and videos. The Motorola One Action might arrive with 3GB/4GB RAM variants.

Motorola might launch the phone in three storage options, including 32GB, 64GB and 128GB. In terms of connectivity, the device will support NFC. Furthermore, Motorola could launch the smartphone in Blue and Gold hues. If rumors are to be believed, the phone will ship with Android 9 Pie. The handset could a part of Google’s Android One program. The recently leaked images indicated that the design could be pretty much similar to the Motorola One Vision phone. Separately, the Lenovo-owned company recently launched the Bronze Gradient color variant of the Motorola One Vision. It will cost you Rs 19,999 in India, and can be purchased via Flipkart.