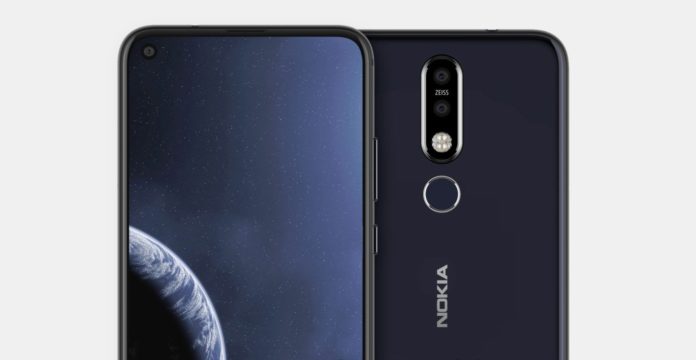 Nokia 8.1 Plus renders and a 360-degree video has been leaked and it looks like HMD Global is going the way of Huawei, Samsung, and Motorola in an attempt to minimize bezels on its smartphone. The renders show the smartphone with a punch-hole display which has been a norm for smartphone manufacturers these days.

Manufacturers like Huawei, Samsung, and Honor have already taken this way and launched their smartphones with a punch-hole display that accommodates the front camera in the hole.

While Motorola has not launched such device yet, renders of the upcoming Motorola P40 were seen sporting the same camera cutout display.

HMD Global, the company that owns Nokia, has been dominating the budget smartphone market with its attractive and powerful handsets combined with Nokia’s aggressive pricing.

The renders of the upcoming Nokia 8.1 Plus, that were shared by OnLeaks in a collaboration with 91Mobiles, show that the smartphone has a glass-sandwich design and a camera cutout display. The renders also show the phone is sporting a dual-camera setup at the back and has AndroidOne branding, which means the device will run on a cleaner version of Android void of any custom skin. The phone has thin bezels at the sides but comparatively a thicker chin with Nokia’s branding.

If the leaks are to be believed, the Nokia 8.1 Plus will have a metal frame with glass back. The smartphone is also shown to retain the headphone jack at the top. The bottom side reveals a type-C port along with bottom firing speakers and a microphone.

The device will be launched as a competition to Honor View20 which is launching in India on 29 January.

The specifications of the phone haven’t been revealed yet by the company and neither have made their way to the leaks. Although by the looks of the phone, it could be assumed that Nokia will be launching it for the price bracket of ₹20000-₹30000.

Vivo “The Waterdrop” leaked in photos, dubbed as “crazy phone”