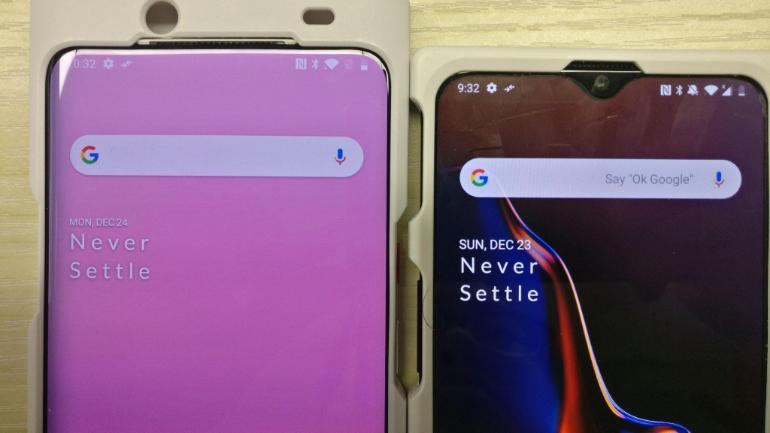 A new image of the prototype of Oneplus 7 has been leaked and it seems the device will sport an edge-to-edge screen with a pop-up front camera or sliding design mechanism as we have seen on Vivo Nex and Mi Mix 3. According to a prominent leakster, SlashLeaks, the device in the image is the real Oneplus 7 prototype.

The interesting thing is that the prototype doesn’t show any front camera anywhere on the screen which suggests the Oneplus 7 would not be adapting to the latest industry trend of having a punch-hole camera. However, the backside of the device is not revealed leaving us speculating that the next Oneplus phone might have a pop-up camera or a slider mechanism. Oneplus 7 is expected to be a step further from Oneplus 6 and 6T in terms of design and aesthetics and if the leaks are to be believed, the company might go with the bezel-less design.

Although Oneplus is quite conservative in terms of design, its the components of the phone that the company focuses on most. However, with Oneplus 7, the company might be looking to reinvent its design altogether as the previous versions of Oneplus phones have been quite similar in looks more or less.

It has also been speculated that the Oneplus 7 will feature a triple-camera module and an ultrasonic in-display fingerprint sensor. Nevertheless, nothing can be said with certainty until Oneplus itself confirms the launch of the device.

If there is one aspect that can be said with a little certainty, its that the Oneplus 7 will come with Qualcomm’s latest Snapdragon 855 processor coupled with 8GB/10GB of RAM.

We have already seen a 10 GB variant of Oneplus 6T in the form of Special Maclaren edition, however, having 10GB RAM on your device now doesn’t amount up to much and at the end of the day, it remains a gimmick. The extra RAM might come in handy in the near future when Android develops more RAM demanding apps.

Vivo “The Waterdrop” leaked in photos, dubbed as “crazy phone”