The Indian Wire » Gadgets » OnePlus Sends Out Invites for its Event in MWC 2019: Might Showcase OnePlus 7

MWC 2019 is widely anticipated across the tech industry because of the sheer number of manufacturers expected to launch their phone during the event. Brands like Xiaomi, Huawei, LG, Sony among others have already announced their dates during the event where they will be showcasing their latest offerings. Now, OnePlus has joined the party as well. OnePlus sent out invites for an exclusive event called Reimagine, nevertheless, there is no word if the company will be launching its next flagship phone during the event. 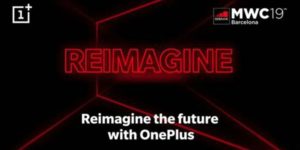 According to sources, the invite says “Join OnePlus at Ultramarinos where drinks and a taste of the future will be on us.” It suggests that the company will be having a party for media representatives, partners, and exclusive guests. The chances of a new phone, however, are slim.

As for the OnePlus 7, the leaks suggest that the phone will see a design overhaul from the company. OnePlus 7 is expected to come with a new screen and camera design. The leaks also speculate that in order to do away with notches, OnePlus is opting for a slider phone with OnePlus 7—like Xiaomi Mix 3.

It would be safe to assume that the next OnePlus 7 will come with the latest Qualcomm Snapdragon 855 SoC. OnePlus is also expected to pack a new fast charger with Warp Charge 30 along with its next flagship.

In terms of camera, the OnePlus 7 is expected to come with Sony’s IMX586 camera sensor making it the first smartphone from the company to feature a 48-megapixel camera. Leaks have also pointed towards a triple camera module for the device. Belonging to the same company as Oppo and Vivo, OnePlus is also expected to come with Oppo’s 10x optical zoom technology.

Apart from phones, OnePlus is also gearing up to launch its first TV. OnePlus CEO had confirmed plans to launch a OnePlus TV last year. He said users can expect the new TV to come with “premium flagship design, image quality, and audio experience.”

“It is a natural extension for OnePlus to address gaps in the television industry, which it tackled in the smartphone market – balancing high-quality hardware with the latest in technology, developing a seamless user experience, and crafting hardware that is minimalistic and timeliness in design,” the company had said.