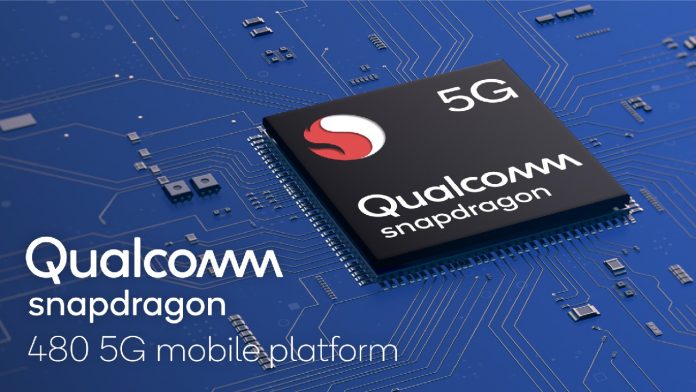 Qualcomm has announced the launch of Snapdragon 480 5G platform which is the latest 5G-capable processor and the first one in the Snapdragon 4-series of chips. This is also the first 4-series mobile platform to be equipped with 5G.

It stated in a press release that Snapdragon 480 has continued to help drive further proliferation of 5G and has provided users access to the global 5G connectivity. The inclusion of 5G technology to the 4-series might be one of the biggest factors in making the next-generation networking standard more accessible to users around the world.

In comparison to the predecessor, Snapdragon 460 and Snapdragon 480 allows smartphone users to stay productive for a longer period of time and recharge faster with an 8nm process and is the first to support Quick Charge 4 Plus and 120fps FHD+ panels, also offering 64-megapixel still images and a triple ISP for triple camera integration that can shoot around three photos at one time.

Qualcomm has also opened up the possibility for making the technology accessible for manufacturers for easily adding 5G technology to their cheapest phones. Kedar Kondap, who is the Vice President of Product Management at Qualcomm Technologies said that Snapdragon 480 5G mobile platforms will improve over OEM’s and consumer’s expectations in delivering high and mid-tier features at an affordable price.

Brenda, the Product Manager of OPPO said that they are excited to leverage the new Snapdragon 480 5G platform for scaling consumer access to and use of 5G globally. The first commercial devices powered by Snapdragon 480 5G mobile platform is being expected to be announced in early 2021.