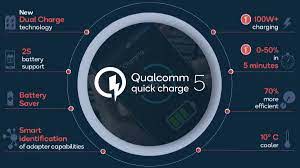 The option of charging quickly, has become one of the coveted feature of all the smartphones, it has been so much empowering that even Apple has added this feature to its iPhone.

With each passing year, the demand and popularity of the wireless charging is increasing. By 2026, it is very much expected that it would reach $25.6 billion. There are a lot of consumers who still go for wired charging instead of wireless one, the added benefit of being able to use phone at the same time can one of the reason.

Today, Qualcomm makes an official announcement regarding the latest iteration of the super fast charging which is known as Quick Charge 5. Since Quick charge 1.0 in the year 2013, the company has been providing the most unique improvements that one would have ever achieved in the single generation. In comparison to the Quick Charge 4, the new implementation is 70 percent more efficient and is supportive for different range of input voltages ranging from 3.3V to 20V, and up to 5 A of current. Adding more on the specifications Qualcomm has stated that if right cable is used with a phone supporting Quick Charge 5.0, more than 100W of power would be delivered to the charging circuit of the device.

As per the reports it has been told that in five minutes, Quick Charge 5.0 can bring a 4,500 mAh battery from 0 to 50 percent, while 15 minutes would be taken for topping it up. In comparison to the previous generation, this is four times faster.

Qualcomm stated that Snapdragon 865 and 865 Plus mobile platforms have been provided in the Quick Charge 5.0 supporting phones which are soon going to be launched.

In recent months, Vivo and Oppo have come up with their own 100W fast charging solutions. In markets outside of China, Qualcomm’s tech is expected to witness higher rate of adoptions. It would be interesting to discover how the functioning of these technologies will lead to longer battery duration, but when it comes to Qualcomm’s QC5 the users would be getting an added layer of protection which would ensure that your device does not turn out into an expensive popcorn.