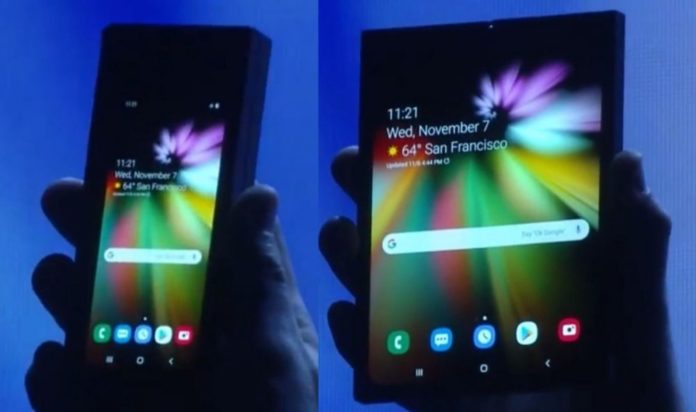 Samsung has announced the launch of its next-gen Galaxy lineup during its Unpacked event, scheduled for February 20 in San Francisco. There have also been various rumors about the release of the foldable phone from Samsung, the specific date of which has not been confirmed. Until now.

Samsung Mobile shared a tweet where the company teased the launch of its first-ever foldable smartphone on February 20.

The future of mobile will unfold on February 20, 2019. #SamsungEvent pic.twitter.com/MHvwrt7Rf4

The teaser by Samsung does not reveal its foldable smartphone in full glory but hints at it with the transition, which confirms the launch of the device on 20 February. In the caption of the teaser, Samsung writes “future of mobile will unfold” which is another hint at the release of the phone. The texts that appear on the teaser are also hinting at a wraparound display, and, lastly, the text written in Chinese in the video translates to “The Future Unfolds”, hinting further at the launch of the device.

This is not the first time that Samsung is teasing its foldable smartphone. Earlier this year, Samsung released a promo video showcasing the various upcoming technologies from the company and in that promo video, the Galaxy F from Samsung was spotted as well.

As much as the information the rumors and reports have provided, the Samsung Galaxy F could be expected to come in with a 4.58-inch one on the front and another 7.3-inch display inside the fold.

A report has also suggested that the foldable phone from Samsung will come with two batteries and the total battery capacity of the phone will be up to 5000 to 6000 mAH. The phone is also rumored to come with an 8GB of RAM and 128GB of onboard storage. On the camera front, we can expect a 12 MP + 12 MP dual camera and an 8 MP front camera. The device is expected to come with a price tag of $1,700(₹1,20,000 roughly).

Apart from this, just a few days ahead of the official launch of the Galaxy S10-lineup, a banner of the Galaxy S10+ has been leaked. The image of this banner was shared by tipster Evan Blass. The banner shows the same design that we have come to expect after being subjected to various rumors and reports about the devices.

So yeah, looks like that's definitely happening… [Thanks, tipster!] pic.twitter.com/CQ0nxrAGh2

Samsung is expected to launch its Galaxy S10-lineup along with the Galaxy F at the Unpacked event from the company, which is scheduled to take place in San Francisco on February 20. The company is also expected to unveil its Galaxy Watch Active at the same event.