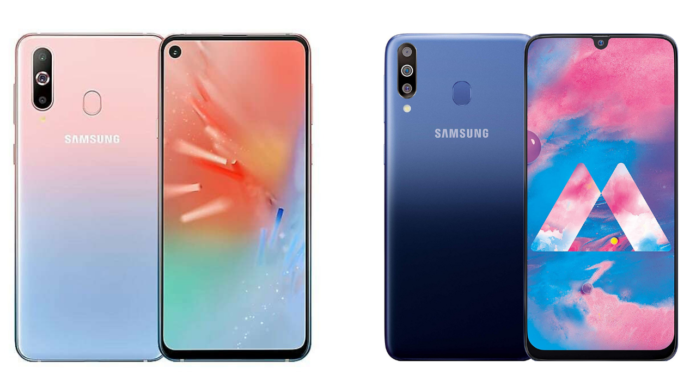 The Galaxy A60 comes with a 6.3-inch Infinity-O LCD display with FHD+ resolution, with a 91.8 percent screen to body ratio. It has a hole-punch camera at the top left corner of the display which is smaller in size compared to the Galaxy A8s and accommodates a 32-megapixel selfie shooter. The smartphone is powered by Qualcomm Snapdragon 675 SoC and runs on Android 9.0 Pie out of the box.

In the imaging department, the Galaxy A60 comes with a triple camera module at the back compromising of a 32MP primary sensor, 8MP wide-angle camera, and a 5MP depth sensor. The smartphone also has a traditional capacitive fingerprint sensor mounted at the back of the device. It is fueled by a 4,500mAh battery and comes with 25W fast charging support via a USB-C port. The Galaxy A60 marks the fourth device from Samsung to come with 25W fast charging support after Galaxy S10 5G, Galaxy A70, and Galaxy A80. The smartphone comes with 6GB of RAM and 128GB of onboard storage.

The Galaxy A40s, on the other hand, features a triple rear camera module at the back compromising of a 13MP primary camera, 5MP depth sensor, and a 5MP wide-angle lens. At the front, the smartphone has a 16-megapixel selfie shooter. The phone has been made available in China with 6GB+64GB configuration. Both Galaxy A60 and Galaxy A40s come with NFC support, as is standard with the mid-range Galaxy smartphones.