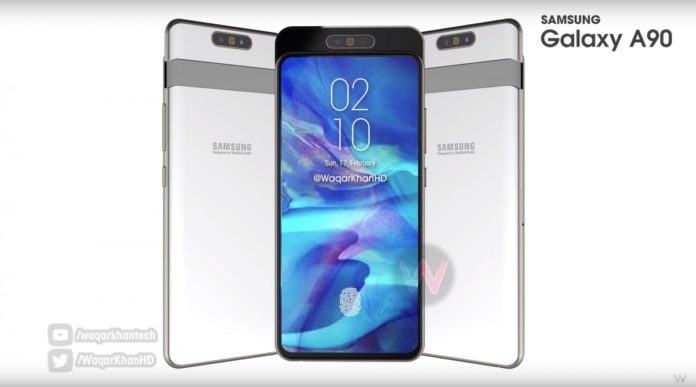 Samsung Galaxy A90 has been leaked in render video showcasing its innovative slider and rotating camera module. The last couple of days have been crowded with Samsung Galaxy A-series leaks and with the April 10 launch event, the speculations are expected to be realized. Samsung seemingly has put its focus on the Galaxy-A series since the launch of its flagship S10-series smartphones. There have been various leaks regarding the Galaxy A90 in the past, and a Galaxy A-series microsite listing Galaxy A90 with a notchless display was also spotted. According to rumors, the smartphone will be powered by Qualcomm Snapdragon 710 SoC coupled with 8GB of RAM.

As we mentioned, a fresh new render video of the Galaxy A90 has been surfaced online revealing the notchless display of the smartphone along with slider mechanism that accommodates the rotating camera module. The render video was posted by Waqar Khan who has leaked various smartphone renders in the past. We have seen rumors and reports in the past suggesting at the notchless display and a pop-up selfie camera of the Galaxy A90. The same report also claims that the smartphone will feature an in-display fingerprint sensor, a Qualcomm Snapdragon 710 SoC, 6GB or 8GB of RAM and 128GB of internal storage.

The render video, however, suggests that the Samsung Galaxy A90 will have an edge-to-edge display but will not feature a pop-up selfie camera. Instead, it will have a slider mechanism which houses a rotating camera module. The rear cameras will be rotated to act as a selfie camera, according to the video. IceLeaks, another prominent leakster, has confirmed that this leak is “almost completely correct”, so the Galaxy A90 could be expected to look like this. Another leakster OnLeaks also confirmed the sliding and rotating camera module on the Galaxy A90 through a tweet.  Moreover, OnLeaks further adds that Samsung Galaxy A80 and Samsung Galaxy A90 will feature a 48-megapixel primary sensor, a ToF sensor, and a flash.

The leaked video further suggests that Samsung will be using the traditional earpiece on the smartphone instead of the instead of an acoustic display as seen on the Huawei P30 Pro. It has also been revealed that the smartphone will feature an in-display fingerprint sensor. However, with the leaks suggesting a slider mechanism with rotating camera module, it is hard to say if the device will support face unlock, as it may be a slow process of unlocking the phone. The Galaxy A90 has two moving parts, with the first being the slider mechanism while the second will be the rotating cameras.

Samsung has scheduled the launch of the Galaxy A90 for April 10, therefore we only have a few days before these features are officially confirmed by the company itself. 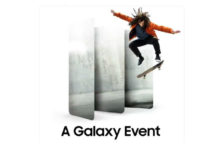 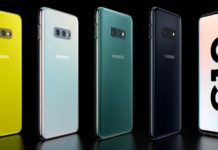 Samsung might launch a budget flagship smartphone with Snapdragon 855 : Report