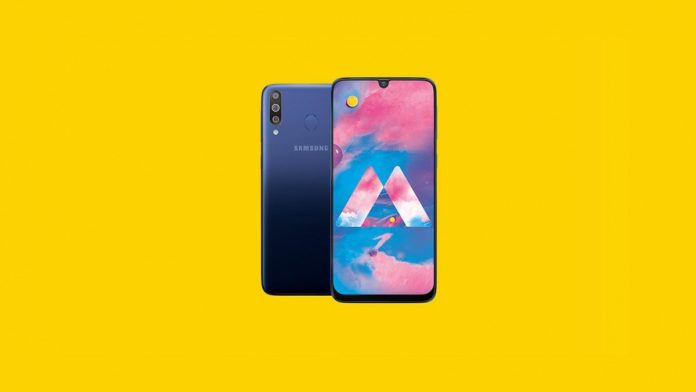 Samsung has launched the third smartphone, the Galaxy M30, in its millennial targeted M-series. Like the Galaxy M10 and the Galaxy M20, the newer Galaxy M30 comes as an online exclusive smartphone. The Galaxy M30 also brings some upgraded features over the other two devices in the M-series including triple rear cameras, a large Super AMOLED display, and a beefy 5,000mAh battery with support for fast charging. Samsung has bundled the hardware in a gradient designed body and will be making the device available exclusively through Amazon and Samsung’s e-shop from March 7, 2019 onwards.

The Galaxy M30 has been launched as a competition to Redmi Note 7, Redmi Note 7 Pro, Nokia 6 Plus and Honor 10 Lite.

Samsung Galaxy M30 comes in two variants: 4GB RAM with 64GB onboard storage and 6GB RAM with 128GB onboard storage. The 4GB RAM variant is priced in India at ₹14,990, the 6GB variant on the other hand is priced at ₹17,990. The device comes in gradient Black and Blue color options. The Galaxy M30 is the most expensive smartphone in Samsung’s M-series, which compromises of Galaxy M10, Galaxy M20, and the newly launched Galaxy M30. Samsung has announced that the Galaxy M30 will go on sale at 12pm IST (Noon) on March 7 via Amazon and Samsung e-store.

The Galaxy M30 runs on Android 8.1 Oreo with Samsung Experience v9.5 on top. Samsung has promised that it will soon announce the Android 9.0 Pie rollout for Galaxy M30 along with M10 and M20. The new smartphone from Samsung features a 6.4-inch full-HD+ Super AMOLED Infinity-U Display with a 19.5:9 aspect ratio. In terms of performance, the device is powered by the octa-core Exynos 7904 processor paired with up to 6GB of LPDDR4x RAM.

At the camera department, the Galaxy M30 packs a triple rear camera with compromising of  a 13-megapixel primary RGB sensor with f/1.9 aperture, a 5-megapixel depth sensor with an f/2.2 aperture, and a 5-megapixel ultra wide angle lens with a 123-degree Field-of-View (FOV) and an f/2.2 aperture. The front of the device houses a 16-megapixel selfie shooter. The storage on the device can be expanded up to 512GB using a microSD card.

The Galaxy M30 also features the largest battery in the M-series with a 5000mAh capacity. The device also supports fast charging facilitated by the bundled 15W charger. According to Samsung, the battery on the device will easily last a full day  can be topped up at thrice the speed compared to a 5W charger via the USB Type-C port. The device supports face unlock and the fingerprint scanner is mounted on the back panel.