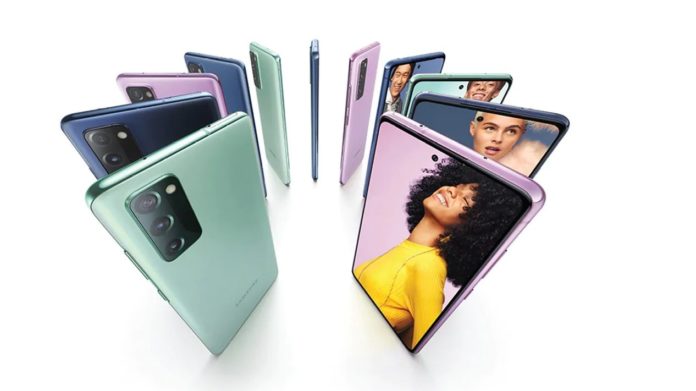 Galaxy S20 FE 5G is powered by Qualcomm Snapdragon 865G 5G chipset with Adreno 650 GPU, coupled with up to 8GB RAM and 128GB internal storage. The storage on the device can be expanded via a microSD card up to 1TB. On the other hand, the 4G variant was powered by Samsung Exynos 990 chipset. The device runs on Android 11 out-of-the-box with Samsung’s custom OneUI 3.0 on top.

The 5G variant of the Galaxy S20 FE has the same camera setup as the 4G variant. At the rear, the phone features a triple-camera setup with a 12MP primary sensor, a 12MP sensor with an ultra-wide-angle lens and f/2.2 aperture, and an 8MP telephoto camera. The camera setup is capable of 30x space zoom. Upfront, a 32MP sensor is placed under the tiny punch-hole at the center.

The new 5G variant features the same 4,500mAh battery with 25W fast-charging support, unlike 15W fast-charging offered in the 4G variant. The smartphone also supports wireless charging 2.0, in addition to Samsung’s Wireless PowerShare to charge other supported devices. The device ships with IP68 certification for dust and water resistance.

Connectivity options like Wi-Fi, Bluetooth v5.0, GPS/ A-GPS, NFC, and a USB Type-C port are on offer. The phone also features an in-display fingerprint scanner built into the display.

Galaxy S20 FE 5G will be available in three color options- Cloud Lavender, Cloud Mint, and Cloud Navy. As for the pricing, the smartphone starts from Rs. 55,999 for the single 8GB + 128GB storage variant. It will be available on Samsung India’s website and Amazon for sale.

Considering the premium pricing of the smartphone, it will compete with the recently launched OnePlus 9, which is powered by Snapdragon 888 5G SoC, Hasselblad-allied 48MP triple-camera system, and 65W fast-charging, starting from Rs. 49,999 for the 8GB + 128GB storage variant. OnePlus 9 seems way ahead of the Galaxy S20 Fan Edition 5G at this price point.