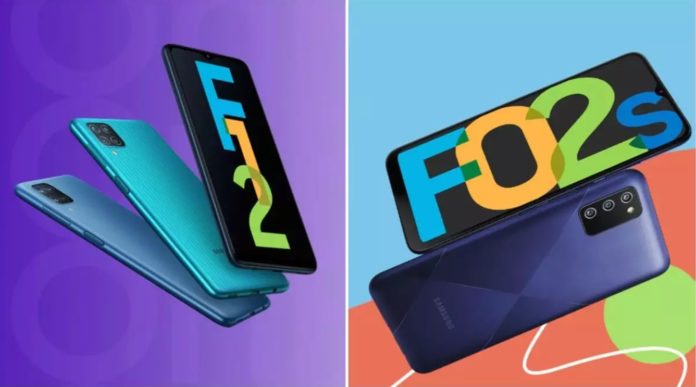 Samsung Galaxy F02s is powered by Qualcomm Snapdragon 450 octa-core processor clocked at 1.8GHz, coupled with up to 4GB RAM and 64GB internal storage. The storage on the device can be expanded via a microSD card up to 1TB. The smartphone runs on Android 10 out-of-the-box with Samsung’s custom OneUI 3.0 on top.

The phone features a 6.50-inch HD+ IPS LCD display with a resolution of 720 x 1,600 pixels and an aspect ratio of 20:9. The display has a waterdrop-style notch for the front camera.

As for the cameras, the device comes with a triple-camera setup at the rear with a 13MP primary sensor and two 2MP sensors for depth and macro shots. The rear camera module has a rectangular layout with a vertical arrangement of cameras, along with a flashlight. Upfront, a 5MP sensor is placed under the notch.

The mobile phone carries a 5,000mAh battery with 15W adaptive fast-charging support. The device has a side-mounted fingerprint scanner. Connectivity options like 4G, Wi-Fi, Bluetooth v4.20, and a USB Type-C are on offer. The device weighs 196 grams.

Galaxy F02s is offered in three color variants- Diamond Black, Diamond Blue, and Diamond White. The smartphone starts from Rs. 8,999 for 3GB + 32GB storage variant in India. The smartphone will hit the market on April 9.

Considering the pricing of the smartphone, it will rival Realme Narzo 20A, which is powered by Snapdragon 665 SoC and features almost similar specs as the Galaxy F02s, starting from Rs. 8,990.

Samsung Galaxy F12 is powered by Samsung Exynos 850 octa-core processor based on an 8nm fabrication processor, paired with 4GB LPDDR4x RAM and 64GB internal storage, which can be expanded up to 1TB via microSD card. The smartphone runs on Android 11 based custom OneUI 3.1.

The phone sports a 6.5-inch HD+ IPS LCD display with a resolution of 720 x 1,600 pixels and a 90Hz refresh rate. The display has an aspect ratio of 20:9 and a waterdrop-style notch for the front camera.

Coming to the cameras, the phone sports a quad-camera setup at the rear with a 48MP primary sensor, a 5MP wide-angle lens with f/2.2 aperture, and two 2MP sensors for depth and macro shots with f/2.4 aperture. Upfront, a 16MP selfie snapper is placed under the notch.

Galaxy F12 is offered in three color options- Celestial Black, Sea Green, and Sky Blue. The device starts from Rs. 10,999 for the 4GB + 64GB storage option in India. The sale starts on April 12.

Considering the specifications, the Galaxy F12 seems to be a rebranded version of Galaxy M12. It will be an interesting rivalry between the two Samsung phones with similar pricing and specifications.