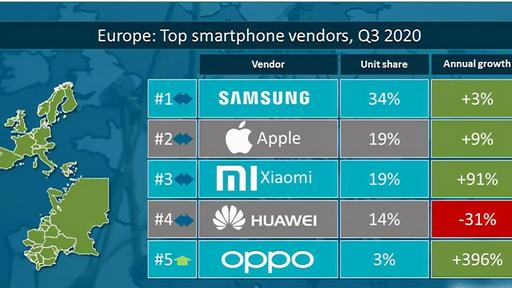 Canalys has released a few reports showing the performance of key smartphone manufacturers at the European market. The particular interest is the performance of Huawei. The company shifted its focus to Europe after it was shut off by US at the North American market. The recent ban that prevented the company from using Google services and this seems to have continued to take its toll because the reports show that Huawei recorded around 31% decline in its annual growth though it maintains the fourth position at the European market ranking.

Samsung has maintained its lead at the market though it recorded a slender 3% annual growth. Samsung commands a 34% share of the European smartphone market and US tech giant Apple is at the second position with an estimated market share of 19% in Q3 2020.

The chart is almost similar at Western Europe with all of the European market but most of the sales of Oppo have came from Western Europe where it recorded around 942% annual growth.