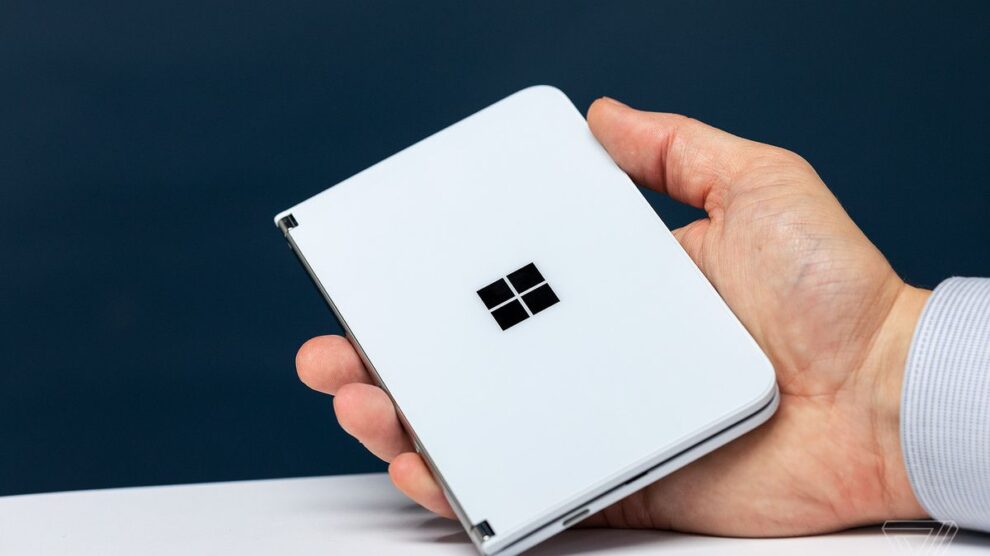 The Microsoft Surface Duo announced last October has appeared in a new set of renders shared by reliable Evan Blass.

As seen above, this image was found on the AT&T website.

This is a foldable device. A Microsoft logo is visible if you fold it as seen above.

The pictures also show the Google Search widget on the first screen along with the date and time widget, with the dock at the bottom holding three apps – Microsoft Edge, OneNote, and Outlook. The dock on the second screen has Google’s Phone, Messages, and Camera apps.

A recent report suggested that Microsoft Surface Duo will have a feature called ‘app group’ to take advantage of the dual-screen form factor. Users would be able to launch both the paired apps together and use them simultaneously. For example, you can create a group of OneNote and Microsoft Edge and then tap on the shortcut icon to launch OneNote on the left screen and Edge on the right screen.

The Microsoft Surface Duo was expected to arrive in July, but that didn’t happen. However, Microsoft has reportedly invited its MVPs to attend a virtual briefing on Surface Duo on 12th August.

It will have biometrics supplied via a fingerprint reader. Microsoft reportedly also included a 3,460 mAh battery to power the hardware.  The device is set to run Android 10 with Microsoft Launcher as the UI.

Microsoft is reportedly working on an Android 11 update soon after launch. Microsoft is expected to announce this device at the end of the current month.