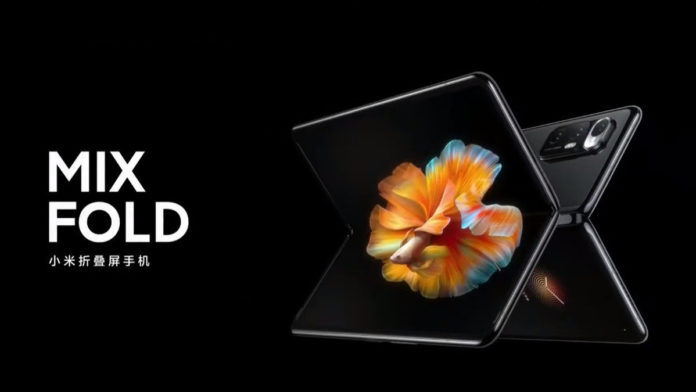 Xiaomi launched its first commercial foldable smartphone- Mi Mix Fold in China. The Chinese firm revived the Mi Mix series and joined the likes of Samsung and Huawei. The Mi Mix Fold comes with flagship specifications and is currently available in China. The phone has an in-ward folding design like the Samsung Galaxy Z Fold series.

The list of products launched by Xiaomi on its “Mega Launch Event” extends, with earlier launches that include Mi 11 Series, Mi Band 6, and smart home products like Smart Projector Pro, Wi-Fi Router, Charging Stand, and the recent addition of the Mi Mix Fold.

Xiaomi Mi Mix Fold is powered by the top-end Qualcomm Snapdragon 888 SoC with Adreno 660 GPU, coupled with up to 16GB RAM and 512GB internal storage. The smartphone runs on Android 11 out-of-the-box with custom MIUI 12 on top. The phone also ships with Xiaomi’s C1 Surge processor that helps in occupying less CPU and storage during the running of apps.

The phone has an inward folding design like the Samsung Galaxy Z Fold series, with a bigger foldable screen on the inside and a smaller screen on the outside. The internal bigger screen is an 8.01-inch Wide Quad HD Foldable OLED display with a resolution of 2,480×1,860 pixels and a 4:3 aspect ratio. The inner screen has a 60Hz refresh rate, HDR10+ support, and Dolby Vision certification. The outer screen is a 6.52-inch AMOLED display with 2520 x 840 pixels resolution and a 90Hz refresh rate.

As for the cameras, the phone sports a triple-camera setup at the rear with a 108MP Samsung HMX sensor, a 13MP ultra-wide-angle lens with 123-degree field-of-view, and an 8MP liquid lens that allows macro shots up to 3cm along with 3x optical zoom and 30x hybrid zoom. Upfront, a 20MP sensor is on offer.

The mobile phone carries a 5,020mAh battery with 67W fast-charging, which the company claims is capable to fully charge the battery in 37 minutes. Mi Mix Fold features a quad-speaker setup from Harman Kardon placed on either side of the screen, described as 3D panoramic sound. Xiaomi claims that Mi Mix Fold is the first phone to feature a quad-speaker system. As per Xiaomi, the hinge offered on the device can undergo 2,00,000 folds.