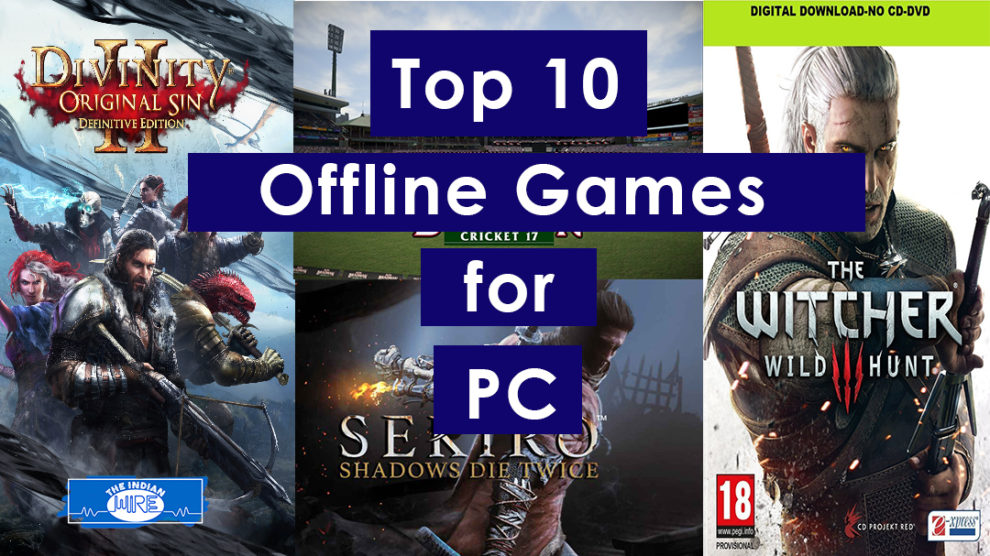 There are so many games for PC, games with the best graphics and features. These games are so addictive that once you start playing them, you will not stop playing the game. But the one thing that sometimes spoils the mood is that these games require the internet, they are not offline. We all want to play games offline, so here is the list of top 10 video games that are offline and available at the steam store.

Original Sin 2 is one of the best offline role-playing game. The game continues the story of its first part. Divinity is dead in the universe and to bring back the divinity, you can choose any characters with their own backgrounds and quests, or create your own as a Human, Lizard, Elf, Dwarf, or Undead. You can blast your opponents with elemental combinations and use height to your advantage. You will have to master over 200 skills in 12 skill schools to win the battle. The  Divine edition of the game is available at the Steam Store for ₹1499.

The Witcher: Wild Hunt is a story-driven open-world RPG game. It is set in the fantasy universe where every step will impact the consequences. The story of the game is about the witch, who is a monster hunter. You will fight with so many mysterious creatures, djinns, wolfs and magicians. The monster hunter is out on the journey to find a child of prophecy. The graphics and the story of the game is very interesting and addictive. The game is available at the Steam Store for ₹299.

Sekiro: Shadows Die Twice is an action-adventure video game. The game is set in the Sengoku period in Japan and follows a shinobi known as Wolf as he attempts to take revenge on a samurai clan who attacked him and kidnapped his lord. The action-packed game has been praised for its plot and the graphics. You will be fighting against the main villain Isshin. The game has a third-person fighting style. The game allows you to fight like a Samurai. The price of the game is ₹2599 after 35% discount. Download the game from here.

Doom is the remake of its original franchise. The game is first-person combat with a single-player offline mode. In the game, you are a Doom Marine who is tasked to kill the demonic creatures on Mars. You can combine your arsenal of futuristic and iconic guns, upgrades, movement and an advanced melee system to knock-down, slash, stomp, crush, and blow apart demons in creative and violent ways. The game is available at the Steam Stone.

Resident 6 is one of the best horror offline games. It is a Third-person zombie shooter game. Resident Evil favorites Leon S. Kennedy, Chris Redfield, and Ada Wong are joined by new characters, including Jake Muller, to face a new horror, the highly virulent C-virus, as the narrative moves between North America, the war-torn Eastern European state of Edonia and the Chinese city of Lanshiang. The game has a single-player mode that can be played offline. Download it from here.

Bring out your inner athlete with Beijing 2008. It is the official Beijing Olympic game. The game has 38 official games from the Olympics including Track and Field, Aquatics, Gymnastics, Cycling, Judo, Table Tennis, Canoe-Kayaking and more. The game has career mode and competition mode. In Competition Mode participate with up to three friends in either a single or multi-event challenge offline. The game is available at the Steam Store.

Batman: Arkham Origins is the next installment in the blockbuster Batman: Arkham videogame franchise. the game features an expanded Gotham City and introduces an original prequel storyline set several years before the events of Batman: Arkham Asylum. The game is set on Christmas Eve where Batman is hunted by eight of the deadliest assassins. You will need to think like Batman in order to get away from these assassins. You will get all the gadgets of Batman in the game. The game is available at the Steam Store.

The game is based on the storyline of the famous movie franchise Star Wars. It is a  space combat game where you can play as a Jedi in 16 battlefronts. The game has a new story where Darth Vadar’s elite 501st Legion has risen. You can battle across Star Wars: Episode III environments such as Utapau, Mustafar and the epic space battle above Coruscant. The single-player mode of the game can be played offline. You can download it from here.

Race with some of the most iconic cars from the last 30 years. It is the official game of F1 2017 championship. The game includes iconic F1 cars of the past from five historic teams – Ferrari, McLaren, Red Bull Racing, Renault and Williams. The game has 24 official tracks including Britain Short, Japan Short, USA Short, and Bahrain Short. F1 2017 can be downloaded via this link.

It is one of the best video game if you are a cricket fan. You can sow off your Batting and Bowling skills with this game. The game has motion-captured first-class cricketers, including female cricketers for the first time in all game modes. You can play shots like the helicopter, reverse sweep and scoop shots. While bowlers can go with fast deliveries with leg-cutters, off-cutters, cross-seam or go with spin deliveries including the doosra or googly. The needs internet connection to boot but you can disconnect it once it reaches the main menu. Download it from here.