Fall Guys released on 4th August of 2020. And it is a battle royale like Takeshi’s Castle where one winner takes the crown. Also literally, in some final games. Mediatonic, a British game development team, is responsible for making the game. Devolver Digital is behind the publishing. Since it blew up on Twitch from 31st July, so did the players on launch.

Launch date was no surprise – over 70000 players were playing concurrently. The hype kept spreading, and by word of mouth and Twitter, the game peaked at 172,213 players on 29th August, about two months ago now. Fall Guys is fun but the lack of variety is marring. A certain expectation that the victors will be winners also was a part of the cause.

That’s not to say Fall Guys is a dying game by any means, there’s about 30,000 players playing at the time of writing. There’s about a 80,000 24-hour peak player-count. Season 2 of the game dropped yesterday, and that was kind of expected. On average, the recent statistic was around 30,000 players. 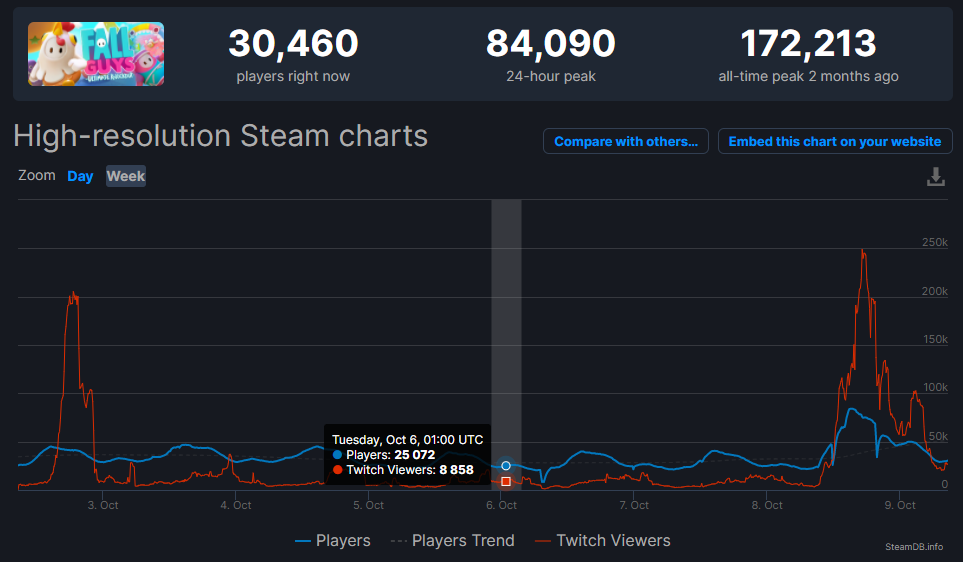 One can assume this was caused by the rise of Among Us in the streaming community. Not only that, the general audience has also been attracted by the ease of access of Among Us. Since Among Us is available on Android and IOS and it’s free on those platforms, we can safely assume that Fall Guys players have also shifted there.

Now, it’s yet to be seen if Mediatonic can make a successful comeback on Fall Guys with a new marketing campaign. It’s still a really fun game with your friends, and you can get it on Steam for Rs 529 in India and $19.99 in the US.