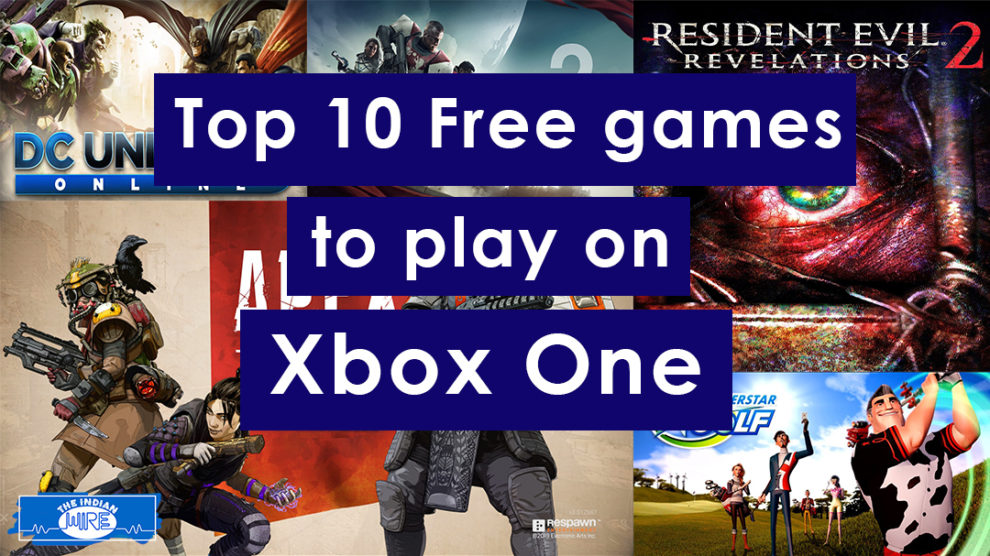 Xbox One is one of the best gaming consoles. The gaming console is the product of Microsoft and it works on the Xbox One OS. The games available for the console are specially designed for it. The games are not free to download, they can be heavy for your wallet. Microsoft has started a subscription service where some selected games are available to play for free, but then again, the subscription service has a price. Even though most of the games for Xbox are paid, there are some games that are available for free. these games can be downloaded from Microsoft Store. Here is the list with top 10 free games for Xbox One:

This is one of the best free Battle Royale games for Xbox. The game is developed by Respawn Entertainment and published by EA(Electronic Arts).  In the game, there over 20 teams fighting against each other to win. Each team has 3 players with special sets of skills. These special sets of skills are based on the character or Legend they choose. The game is set in the Titanfall 2 universe from Respawn Entertainment. The game adds new features with each season, currently, the third season is live in the game. there are some in-app purchases available if you wish to upgrade a weapon or a character. The game is available in the Microsoft Store.

If you have tried Apex Legends and want to try another Battle Royale game, Fortnite should be on your download list. It is giving tough competition to Apex Legends. The game is developed by Epic Games and was launched in 2017. The game can be played individually or in a squad of 4 and up to 100 layers can participate in a round. The first season of the game ended last year in October and now the second season is live now. To make the game more interesting, The developer brings various characters like John Wick, NBA players, and Marvel Superheroes from time to time. The game can be downloaded from the Epic store of Microsoft Store.

If you are done with Battle Royale games and want to try new games, then play Destiny 2. It is a multiplayer online First-person shooter game. The game is based on future Earth and players will play as the “Guardian”. Here you will be traveling in our solar system to solve its mysteries and defeat the villain Ghaul. Players can play in hte player versus environment (PvE) and player versus player (PvP) game types. In addition to normal story missions, PvE features three-player “strikes” and six-player raids. The game is available for free but its DLCs will cost around ₹1700. You can download this game from Steam Store and Microsoft Store.

It is one of the lite mode games that you can play with your family. The game will take you to various golf courses to make you the ultimate golfer. Powerstar Golf is a skill-based game that’s easy to pick up and play but challenging to master. Your friends can see exactly how you’re smashing records with leaderboards built right into the course. The game is available at Microsoft Store.

The only sports game that is free for Xbox One is eFootball PES 2020 Lite. You can build your dream team in myClub and even support your favorite side in Matchday mode. The game offers teams like FC Barcelona, Manchester United, FC Bayern München and Juventus (That is exclusively available at eFootball). Though the game is free to play you can download some additional features with in-app purchases. Download the game from Microsoft Store.

Everybody loves to shoot some Zombies so here is one Zombie Shooting game. The Horror game won the Game Of the Year 2019. This game is the remake of 1998 Resident Evil 2. The story revolves around Raccoon City Police officer Leon S. Kennedy and college student Claire Redfield. They struggle to get out of Raccoon City as the T-Virus(Zombie) is spreading in the city. The game has 4 Episodes but only the first episode is free to play. The game has Raid mode to make it more exciting and long. It can be downloaded from Microsoft Store.

Fight like a naval officer in this game. The free to play the game will decide who is the king of the seas. In this Massive Multiplayer Online Game, Players can battle others at random or play co-op battle mode against bots or an advanced player versus environment (PvE) battle mode. The game has four different types of ships: destroyers, cruisers, battleships, and aircraft carriers. The game features navies of major nations including the United States Navy, the Imperial Japanese Navy, the Imperial German Navy and the Kriegsmarine of Germany. Download this game from here.

The game where you play as your favorite superhero in order to save the earth from the ultimate threat. The free game allows you to choose one side- Heroes or Villains. The ultimate goal is to save Earth from Brainiac. You can create your character to experience true action combat, as you fight alongside and against legendary characters such as Batman, Wonder Woman, Superman, Lex Luthor, and Circe. The game is a MMO and can be played with friends. Download the game here.

Life Is Strange is an episodic graphic adventure video game. The game was released in five episodes. In the game, you will play the character of a girl who has the ability to rewind time. The game is about her decision to rewind time and its effect in the present. Download the game here.

Top 10 action games for Android Phones
LIst of top 10, Most popular Games from Activision that you must play
Comment