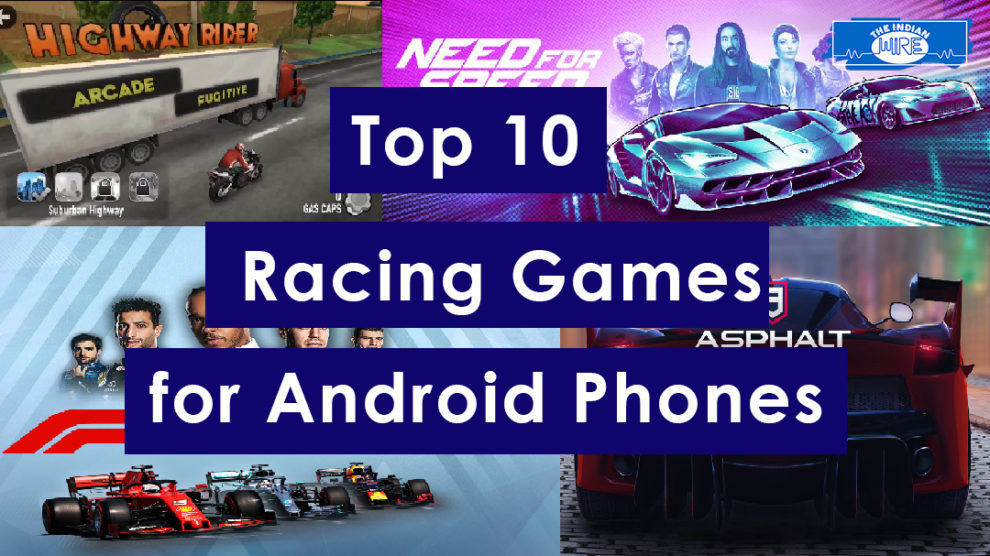 Android games have become more interesting with new and heavy graphics and smooth performance. There are so many categories of games for mobile devices but the one that everyone likes is Racing games. Everyone at least once has played a racing game; with the increasing demand for action games, racing games are struggling to keep their place. So here is a list of top 10 android racing game that you should play if want to take a break from Action games:

F1 Mobile Racing is the official mobile game of the FIA FORMULA ONE WORLD CHAMPIONSHIP™. Here you can develop and customize your own F1 car from the ground up, or race for one of the 10 official F1 teams. You can even challenge opponents from around the world in the multiplayer mode. The game is pretty heavy, its size is 1.5 GB that means the game has great graphics. The game is free but it may require some in-app purchases. The game is available at the Play Store.

The latest instalment from the Asphalt series is Asphalt 9- Legends. Asphalt 9: Legends features a top roster of real hypercars for you to drive that is unlike that found in any other game. The game has cars from brands like Ferrari, Porsche, Lamborghini, and W Motors. Play the game, unlock all the cars and become the legend of the tracks. You can start your street journey in Career mode by completing over 60 seasons and 800 events. The size of the game is 2 Gb and it is available at Play Store for free.

The game comes with real-world cars, from the Subaru BRZ to the BMW M4, McLaren 650s, Porsche 911, and more. Dig, drift, drag, and roll your ride to wins with police on your tail, hitting each inch of the map hard by the time you reach the big end. The game has over 1,000 challenging races. You can always customize your cars, to customize your cars all you have to do is win the races. The size of the app is 50mb but it requires additional downloads. Download the game from Play Store for free.

The best game from Hot Wheels. It has over 25 Hot Wheels cars across 50+ insane physics racing tracks and you can use boosters, loops, and jumps to stunt on the iconic Hot Wheels orange track. You can log in with your social media account to play with your friends. The cars and the tracks are modified by the developer with frequent updates. The game can be downloaded from the Play Store.

It is one of the best bike racing games. You can drive with 4 different camera angles. The game has 4 teams and you can choose any of them along with so many levels that will not bore you. You can control your bike by tilting your phone or by touching the screen. The game offers 16 different motorcycles that you can unlock by clearing a level. The game is available at the Play Store.

Hill climb racing is one of the best Offline racing games. The game offers hundreds of levels to play and a variety of vehicles from bike to truck to a tractor.  You can unlock cars and choose the Best One by clearing stages. The game supports social media link that means you can even play with your friends. The game offers weekly events that can give exciting rewards. The game is available at Play Store for free.

Drive in a highway full of traffic while dodging a hurdle. The game has boosters that can take you to insane speed. You can drive your bike in 4 different highways. The two modes for the game are Arcade mode and Fugitive mode. Highway rider has 10 different characters and each character has his own unique bike. You can unlock and modify each character and bike by making progress in the game. Download the game from the Play Store.

The game has over 50 million downloads in the Play Store. It is so popular because it’s offline, it’s small and it’s simple. The game has 3 Bikes, one will come with the game and the other 2 can be unlocked by making certain scores to the game. Bike works by tilting the screen of the phone. The speed of the bike will be increased with every level.  You will have to keep accelerating moto so that the score will be boosted. The boost factor is shown on the right top of the screen. The game can be downloaded from the Play Store. Experience the thrill of handling a 200 HP beast, speeding through the most challenging race tracks in the world: Aprilia, Kawasaki, Honda, Ducati, MV Agusta, BMW or Yamaha. Compete against reigning Champion Jonathan Rea and other real SBK riders or measure your riding skills in the new Test Ride mode to unlock a game-changing reward. The game has 13 rounds set on 4 continents, including the new German circuit of Lausitz. You can choose your rider from 24 star riders including Tom Sykes and Sylvain Guintoli. The game has 4 game modes- Championship, Quick Race, Time Attack and Test Ride. The game can be downloaded from the Play Store.

The only game in this list that will test your Drifting skills in CarX Drift Racing 2. The game is developed by CarX Technologies. You will be racing twice. The first time you will race as the Leader in a tandem drift, the second time you will be racing as the Follower, you will be following your own score. The game has its own evaluation system The CarX XDS Evaluation System. This Evaluation System is designed entirely on the professional evaluation system used in real-life drift competitions. The game has  Multiplayer mode, Club racing, and single-player mode. The game is available at the Play Store for free.