List of most popular, top 15 Best Racing games to play on a PC 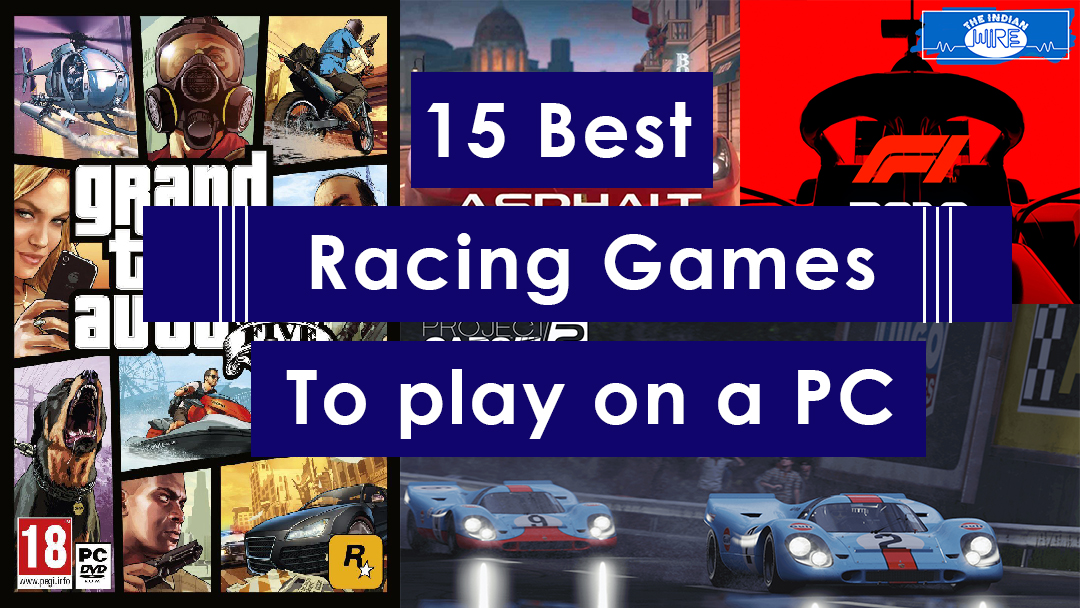 Racing Games are loved by everyone. If you are born in the ’90s, you must have played Road Rash on your PC or console, it’s the best Nostalgia. Now that Road Rash has gone, there are so many games that have taken its place. As the industry is growing new games are coming with the latest technology, there are VR games, games with high graphics and few of them are Online MMOs. So here is the list of 15 games with the best story and graphics that you should play on your PC:

The game is developed by Slightly Mad Studios and the game was published and distributed by the Bandai Namco Entertainment group. The game became popular for its graphics and gaming modes. The game has over 140 tracks and 60 different locations with 180+ cars to choose from. The game supports VR and 12k streaming.  The game is available at the Steam Store for ₹2999

Need for Speed: Heat is developed by Ghost Games and published by EA. This is the 24th game from the Need for Speed game series. The game series has become so popular that Hollywood has made a movie on it. The game is set in an open-world environment called Palm City, a fictionalized version of the city of Miami, Florida, and its surrounding area. The game has about 150 cars- from Honda Civic to Aston Martin with great graphics. The Tagline for this game is “Hustle by day, Risk it all by Night”. The game is available at Microsoft Store for ₹2999.

Grand Theft Auto from Rockstar Games is a series that you can play 24/7. GTA 5 is the latest installment of the game series. The game has interesting missions and the best cars from the world.  Apart from the missions, you can play in the open world of the game. The game allows you to run your car anywhere you want (but within the city). There are hidden missions you can find and complete while playing. The game is available at the Steam Store for ₹2099.

The game is published by Ubisoft. If you want to race with other cars and fly your car too, then you should play this game. The game has 6 playing modes and some awesome tracks. The 6 playing modes include Time Attack, Round, Team, Cup, Laps, team game mode, and Chase.  This Massive Multiplayer online game is available at the Steam Store for ₹999.

This game is the twelfth title in the Formula One game series. It is published by Codemaster and based on the 2019 Formula One and Formula 2 Championships. The game features all twenty-one circuits, twenty drivers and ten teams present in the 2019 Formula One World Championship. Apart from the tracks, Codemaster has rolled out DLCs for the game too. You can download the game and the DLC from Steam Store. The Legend Edition of the game is available at ₹1499.

Dirt Rally 2.0 is published by Codemaster. The game is the thirteenth title in the Colin McRae Rally series and the seventh title to carry the Dirt name. The best part of the game is its graphics and gameplay. The game has realistic driving physics. The game has tracks from countries like Argentina, Australia, New Zealand, Poland, Spain, and the United States.  The game lets players choose between a total of fifty cars, including World Rallycross Supercars and eight circuits from the FIA World Rallycross Championship. It is available at the Steam Store for ₹1299.

Become the star of the 2018 MotoGP Compete as a professional rider and race against all the champions of the MotoGP on 19 official tracks. The game has circuits from locations like the new Buriram International Circuit in Thailand. It is one of the best Bike Racing games for PC. The game has bikes like Ducati and BMW and the best graphics. It is available at the Steam Store for ₹899.

Asphalt is among those gaming series that are available on all the gaming platforms including Mobile Phones. Asphalt 9 is the 9th installment from the series. The game has a total of 82 cars and locations like Cairo, Osaka, the Himalayas, the U.S. Midwest, Scotland, and the Caribbean. Asphalt 9 is available for free at the Microsoft store.

Moto Racer 4 is a racing game you can play on asphalt or dirt in single or multiplayer mode. The multiplayer mode supports up to 10 players in one game. The game has gaming modes that require techniques like drifting, wheelie, and sharp turns. You can upgrade your bikes by earning points. The race tracks of the game are from the United States and Asia. The game can be bought for ₹459 from the Steam Store.

The game is based on the characters from the Sonic- the Hedgehog tv series. It is a Kart racing game with a combination of the best elements of arcade and fast-paced competitive style racing. It has 21 characters form the TV series. The racing game comes with an exciting story where you will have to defeat Sonic’s longtime nemesis Doctor Eggman. The game is available at the Steam Store for ₹2499.

The game is the simulation of the Europian Truck Racing Championship. It has all the 45 trucks with their official livery, including top manufacturers like Volvo, Man, Freightliner, and Western Star. You can play from 20 different teams to become the ultimate Truck racing Champion. The game is available for ₹899 at the Steam Store.

Hill climb racing game was first launched for mobile phones and now it is available for PC too. The game is really addictive. It has over 100 levels and each level has few checkpoints. Reaching on the checkpoint will mark your progress. The game Weekly Multiplayer Events and winning these events will unlock a new vehicle for the game. You can compete with your social media friends by connecting the game to your account. The game is available for free at Microsoft Store.

Forza Horizon 4 is an open-world racing game. The game is set in a fictionalized representation of areas from Great Britain. Regions in the game include Edinburgh, the Lake District, and the Cotswolds, among others, and it has over 450 licensed cars. The game is available at the Microsoft Store for ₹4124.

Explore over-the-top action and physics-bending motorcycle racing in the latest opus of the Trials franchise. You will visit places like the Great Wall of China, New York City, and the Eiffel Tower. The multiplayer mode called “Tandem Bike” has a feature called Rising, where two riders control the same motorcycle. Each player will be responsible for controlling a part of the balance and power of the vehicle. The game is available at the Steam Store for ₹1249.

The game’s gameplay is set in the fictional “Paradise City”, an open world in which players can compete in several types of races. The massive setting gives players an open-ended world to explore, as they race their vehicles through hundreds of miles of roads and underground passages with more than 70 different cars. Two bikes are available at the start, including the FV1100 and Nakamura Firehawk V4 and other bikes can be unlocked by playing the game. The game is available at the Steam Store for ₹665.