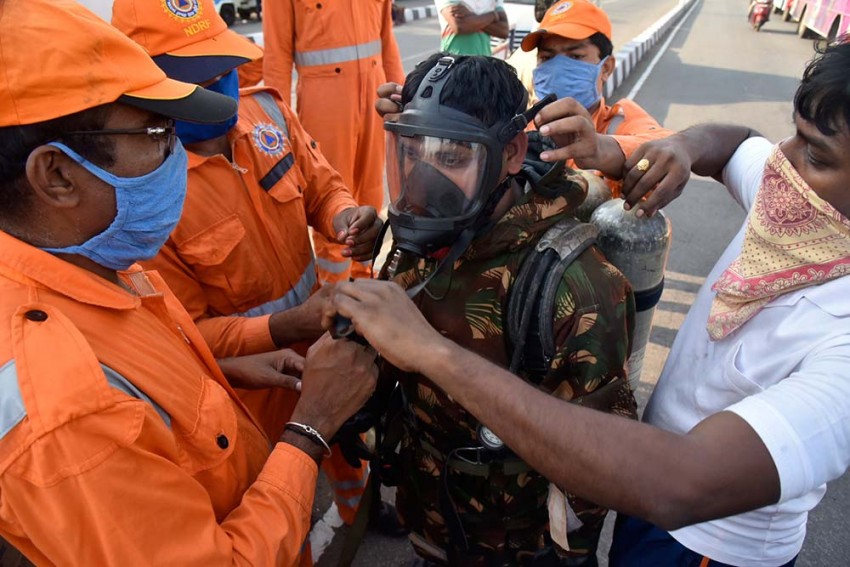 Another gas leak in the country and several questions peep into everyone’s mind regarding industrial safety standards in India.

As and when Industry has flourished in India, accidents and leaks have happened in the last four decades of desperate development.

But are these bound to happen or just happen because of sheer negligence?

Though some accidents/leaks may not become tragedies, engulfing lives and horrifying souls but the spectre of Bhopal Gas tragedy and the ilks may need to seek our consideration now more than ever.

This is because we are trying to recover back from square one, operating business, breathing back Industries on another level, why not imbibe some Sustainability into it.

A gas leak was reported on Thursday from a factory (Nobel Intermediates Pvt Ltd) in Badlapur city of Thane district in Maharashtra.

Although no casualties have been reported so far, but the leak created panic among people living around the unit (approx. 3 km) as they found difficulty in breathing and irritation in eyes for few hours.

“A chemical reaction due to the overheating of sulfuric acid and benzyl acid led to the incident. The fire brigade stopped the leak at 11:24 pm. The situation is under control. No one was injured,” ANI quoted based on Thane Municipal Corporation.

#WATCH | A gas leak from a factory in Maharashtra's Badlapur was reported at around 10:22 pm on Thursday. People in the area were having trouble breathing. Fire brigade stopped the leak at 11:24 pm. The situation is under control. No one injured: Thane Municipal Corporation pic.twitter.com/djdZY77DAE

MPCB official informed: “As per findings of our officials, we have served closure notice to the company as they were using a chemical which was not permitted.”

Nevertheless, there have been other instances of hazardous gas leaks across the country; noticed as well as unnoticed, corrected or subsided.

A brief history of accidents in India:

Last year, Vizag gas leak at LG Polymers resulted in a vapor cloud spreading over a radius of around 3km, with 11 deaths and at least 1000 people falling ill due to exposure of Styrene, a gas with strong toxicological effects on eyes, respiratory tract as well as CNS (Central Nervous System).

In this case, a gas valve malfunction might have caused the leak. It came from one of two chemical tanks that had been left unattended full of Styrene since March 2020 due to pandemic lockdown.

A malfunctioning in the refrigerating unit increased the temperature, causing the liquid chemical to evaporate. Experts suspected it may not just be styrene alone, other chemicals may have felt the air too.

Only last month, another such event was averted when Chlorine gas, stored for cleaning the supply water, got leaked in Brahmapuri (Jaipur), Rajasthan. A cylinder with 900ltrs of Chlorine gas was responsible for the leak.

Local people complained when they face difficulty in breathing late at night. The accident got controlled as the escaping Chlorine was filled into an empty cistern and mixed with water.

However, 20th century Bhopal gas tragedy stand out uncontested in the history of India in which thousands lost their lives, also one of the world’s worst industrial disasters. Seen and The unseen impact of poisonous Gas: Covid says it

In December 1984, around the vicinity of Union Carbide India Limited pesticide plant in Bhopal, Madhya Pradesh, over 500,000 people got exposed to methyl isocyanate (MIC) gas and other chemicals from the leakage.

Nearly 4,000 people, including children, lost their lives in the incident.

According to the 1984 accident survivors’ organizations claims, Bhopal gas tragedy victims account for more than half of the Covid-19 casualties in the city.

The legacy of the biggest tragedy still lives on.

In total, over 130 significant chemical accidents have been reported in the country, based on National Disaster Management Authority (NDMA) data. Collectively, all these resulted in 259 deaths and major injuries to approximately 560 people and more.

We may wonder, it killed several humans, mostly accounted but what about other lives: birds, bovines, dogs, monkeys etc.

Also how much years of efforts gets waste if such toxic substances are released into already degraded air, water and land of ours, the ones we are striving to protect afterall.

What are the current provisions?

The law prevailing in India covers the protection to victims of such chemical disasters. They evolved through our stumbles upon various sections of Indian Penal Code after the Bhopal Gas tragedy and associated SC rulings.

The government, moved by the tragedy then, passed a series of laws regulating the environment and even prescribing guidelines, precautions and penalties.

Bhopal Gas Leak (Processing of Claims) Act, 1985, was one such law that gave teeth to the central government dealing with claims speedily and equitably. But there are several other laws getting their due origin from the distress:

Environment Protection Act, 1986 gives powers to the central government to undertake measures for improving the environment as well as establish standards and inspections for the industrial units.

Public Liability Insurance Act, 1991, as an indemnity or relief to persons affected by accidents that occur while handling industrial hazardous substances.

National Environment Appellate Authority Act, 1997 hears appeals regarding restriction of areas for operations, processes of class of industries to strengthen the safeguards under Environment (Protection) Act, 1986.

2010 formed National Green Tribunal is a quasi-judicial body that deals with matters relevant to environmental protection and conservation of forests.

And several others like the Hazardous Waste (Management and Handling) Rules for Management; Storage and Import of Hazardous Chemicals in 1985 and the Factory Act, 1948 were amended in the light of emerging needs.

Therefore, our legislative framework is no longer in sync with the changing times and needs of the National security in terms of health and livelihoods of population.

Even the compensatory mechanism for the victims of such accidents is bleak. 36 years after Bhopal tragedy and a curative petition is still waiting to come out of paperwork to the Supreme Court (SC) for reasons being the several inconsistencies and inadequate settlement.

Three decades have passed and the compensation for such categorical death or injury remains the same. We have remained like sitting ducks for accidents to happen and shatter a few lives, just to forget again.

In 1992, an Environment Relief Fund was setup but framing of its rules took 16 years for the government and so far, no steps have been defined to utilize the fund.

The onus lies on the Country’s representatives to understand the need of the hour and ensure protection, dignity, and well-being of its vulnerable citizens. Does Covid Vaccine really alters the DNA? Still doubting the vaccine for life
Protection against injury or deaths from Covid vaccines: should India grant Indemnity to vaccine manufacturers?