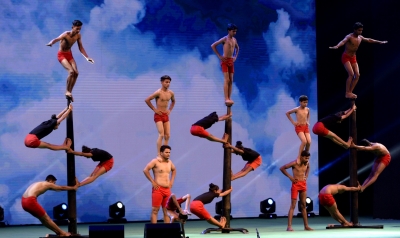 Ranchi, Sep 19 (IANS) With an aim to support Jharkhand becoming a leader in sports economy, India’s premier National Sports Promotion Organisation (NSPO) STAIRS (Society for Transformation, Inclusion and Recognition through Sports) Foundation on Thursday announced its entry into this state. STAIRS’ commitment towards the development & promotion of grassroots sports in the State is manifested through the opening of its National State Development Board.

Former Principal Secretary to Prime Minister of India, S.K. Mishra launched the National State Development Board office here. Mishra is mentoring STAIRS Foundation and was present on occasion to encourage the initiative in the presence of Prof. AGK Menon, Vice Chairman, ITRHD, Mr. Chandrakant Rajpat, President STAIRS Jharkhand chapter, media persons and many other eminent personalities from the State.

S.D. Singh will be the National President of the board headquartered at Ranchi. He will be instrumental in not only in mentoring and leading the State Development Board but also the boards of other states in the country. He will be guiding and supporting Stairs Foundation in its various sports development-related programs and projects.

Welcoming Singh, Siddhartha Upadhyay, Founder and Secretary General of STAIRS and Member of the Governing Body of Sports Authority of India and, said: “STAIRS Foundation is committed to make India a sporting nucleus in the world. Our entry into Jharkhand is a natural progression in this direction and further reiterates our commitment to sports broad-basing and grassroots sports development in the country. We want Jharkhand to write a new chapter in the history of sports by steering the growth of the country. We are happy to announce our entry into the State of Jharkhand and participate in its upward journey.”

“Very soon we will be announcing our programs which not only look at supporting India in its Olympics Medal journey but also making sports one of the most lucrative sectors for the state government. Sri S D Singh ji will not only help us achieve this dream for State but would also steer lead the movement across the country. Plans are afoot to set up similar State Development Boards across the country,” he added.

Meanwhile, Singh, President, National State Development Board, Stairs Foundation, said: “Jharkhand has been first in implementing Prime Minister Modi’s several national initiatives such as Jan Dhan Yojana, Medical, Man Dhan Yojana and now STAIRS is committed to strengthen not only the hands of the State Government but also state sports federations / associations / other bodies that are working in the field of sports promotion under the FIT INDIA initiative of the Prime Minister.”

“With its exposure and expertise to penetrate into the grassroot levels reaching each and every household in every village of Jharkhand state offering one or many sports activities that suits the particular environment is the ultimate aim of STAIRS” He has invited individuals, sports bodies, PSUs, Private organizations, sports persons, sports lovers to join hands with the STAIRS in this venture,” Singh added.

Khelo India was a sports initiative that acknowledged every child’s right to play. It was designed especially for underprivileged youth to provide them free access to sports equipment, infrastructure and space. The program was divided into Khelo Dilli, Khelo Haryana, Khelo UP, Khelo Himachal, etc.

STAIRS was the first organization in the country to initiate a state-based sports development program which was started in Himachal Pradesh as Khelo Mahaotsav where several talented youths participated.

Stairs has won the Rashtriya Khel Protsahan Puruskar in 2016 and recognized as NSPO by the government in 2019 amongst other accolades and recognition it has won.