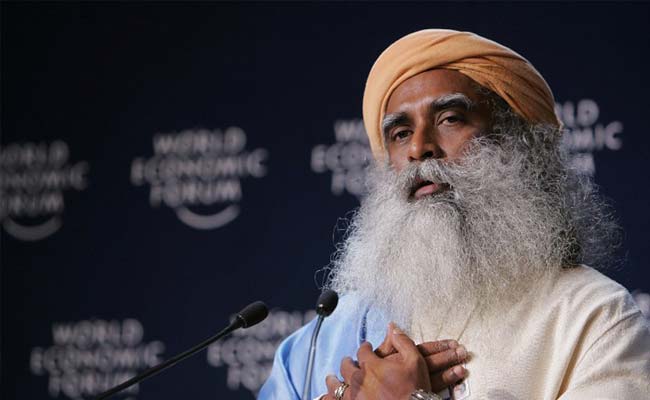 In an exclusive interview, Sadhguru, the man trying to save the depleting rivers explains benefits of campaign and need to save rivers for future generation.

In an exclusive interview of Jaggi Vasudev, the man fighting to save the existence of rivers in India often known as Sadhguru, with the ET expressed his concern that humans are no longer connected with nature.

Sadhguru has launched a campaign under the name of the rally for river trying hard to save the depleting rivers. According to him if trees are planted in the area of 1 km on sides of the banks of the rivers it will save the rivers of India from vanishing.

During the interview when asked what his campaign rally for rivers has received both appreciation and criticism what is his view, he replied that I know how the river behaves. He said that his involvement with the rivers was not academic or he was no scientist, he was just an ordinary many connected with the rivers and their nature of the conduct.

Citing his early days experience he said that till the age of 17 he swam in the waters of the Cauvery, but if he goes to the place back there, he cannot see the water, instead can walk on the same grounds where once the river flew. He said that this condition of the depleting rivers worried him and brought tears to his eyes. He said that “Tears come to me when I see the Cauvery. Many years ago, from Bagamandla and Cauvery, I rafted on the river. I lived by it, on it. I became one with the river. I know how it behaves.”

He further added that Cauvery has been a source of life for many in Tamil Nadu and Karnataka. According to the Sadhguru, the current generation has harmed and depleted the nature in a manner done by no other generation. He said that in the coming years the next generation would not have anything to eat. He further added that people at the beginning do not believe in his ideas, but he strongly feels that if anyone has the capacity to destroy something, it also has the capability of repairing it.

Sadhguru urged that the people should at least take the initiative to try and save the rivers. He assured that if people take a step forward and do a little bit, nature will catch up and do the rest. He added that though the rally has taken off the people still are not confident about its success. He advised that people should have faith and not underestimate anything and that is the power of Sankalp (resolution).

Talking about his resolution of planting 114 million trees he said that “if we all decide to plant one tree today and take care of it and plant one more in two years, it is a done thing.” He informed that 32 million trees have already been planted till date which has increased the forest cover by 7.2 %.

When questioned what does this rally seek to achieve, he said that he only wants to save the rivers, which will also result in better health and increment in the income of the farmers. Further explaining the benefits of planting trees he said that if trees bearing fruits are planted according to the suitable climate and the fruits are included in the daily diets, it will reduce the expenditure done on health by 40 %.

Currently, only 4% of India’s diet is fruit, if this is increased to 30 % people are likely to live longer and healthier lives and this will also save the rivers. “When you eat more fruits, your sleep quota comes down, your productivity goes up,” he said”

He further added that farmers who switch to tree-based agriculture from crop-based agriculture, their income is likely to boost up three to eight times, depending on the climatic and land conditions.

Providing data Ssadhguru said that out of the total area covered by the rivers 25-26 % is owned by the government and the rest is farmland. The land under the government should undoubtedly be converted into forests and the remaining land should behold tree-based agriculture. “If we leave out deltas, 6-8 % that we should not disturb, the rest, 68 %, 1 to 1.5 km can be tree-based agriculture. We can have medicinal plants and fruits and the farmers’ incomes can go up,” he said.

When questioned if the government is working with him on his project of the rally for rivers he said that the central government can only make policies, it is the state government that needs to take action. He added that he has been personally travelling across India to all the states spreading the idea and even few of the governments have signed MoUs with him supporting his cause. Maharashtra and Madhya Pradesh are in the forefront he said.

Sadhguru also spoke about the need for people to make missed calls to mark their participation in the cause. He explained that this whole project is not just a matter of few years, it will take at least 15-20 to see the results and hence it is not a political party thing which may be changed in five years time.

“A policy like this takes 15 years to implement and it will take five more years to see the increase in river flow. Hence this is not an election winning policy. That is why we want 30 crores missed calls… 30 crore is 40 % of the electorate. If 30 crore people accept this and say they don’t want freebies and want to support the government in something that is long-lasting like this,” Sadhguru said.

Nandini KR : Everything you need to know about USPC topper
7 months into CM role, Adityanath talks about achievement, controversies