Apple is always strict regarding third-party iOS App Installers and every now or then it revokes the certificates of these App Installers in an attempt to bring them down. However, the revocation rarely impacts the third-party stores as the developers quickly pitch in to get the certificate renewed.  But, lately, the onslaught of Apple is consistent and ruthless. Once the developers get the certificate renewed, Apple revokes the same again and this tug-of-war is continuing since a considerable period now. Ultimately users are the sufferers as they cannot download tweaked iOS applications and even the installed tweaked iOS applications stopped working. In this post, we are going to provide an alternative iOS App Installer that goes by the name of ‘TutuApp Lite.’ 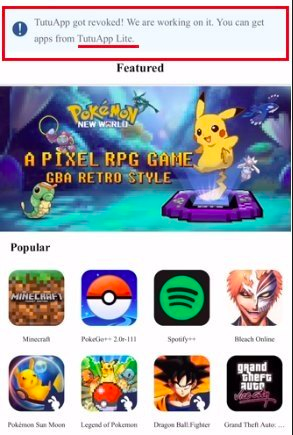 Launched by TutuApp, TutuApp Lite is the prototype version of TutuApp at a small scale. The inventory is not that huge as compared to the original TutuApp store, but it does contain all the popular tweaked apps and games that you might require. Moreover, developers do add new apps and games on a regular basis. Until a permanent resolution comes into place for the revocation issue, users interested in downloading tweaked iOS apps and games can go for TutuApp Lite. Well! The question of whether TutuApp Lite is a worthy download or not is slightly irrelevant since it is a prototype to TutuApp and developed on a smaller scale. The sole purpose of developing TutuApp Lite is to provide the users with a platform to download popular tweaked iOS apps and games until a fix comes in place for the issue of consistent revocation. As far as features are concerned, TutuApp Lite has all the features of TutuApp, but at a smaller scale.

Get TutuApp Lite Up & Running on iPhone/iPad [No Jailbreak]

Here we are at the end of this post. If you have any questions to ask regarding TutuApp Lite, feel free to reach out to us via the comments section provided below.