Google, posting about the update on its official blog, said the new design for Gmail will bring crucial changes. The new design is said to make switching between work account and personal account easier. With the update, users will be able to view the attachments like photos without opening or scrolling through the conversation.

The new design ditches the prominent red banner on the top, which has been on Gmail for quite some time. The material theme design is cleaner and has a lot of whitespaces. The top of the Gmail has now a search bar, while the hamburger menu on the left will let users switch tabs. 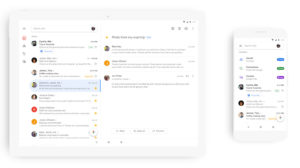 On the right side, users can find the profile option which will grant access to their profile information and also let add another account. By tapping on the profile photo, users can access option for adding work accounts on the Gmail app and manage or switch between these accounts.

According to Google, the update comes in as a part of a larger effort to make G Suite look and act like a family of products, designed by Google Material Theme. The new design shall be introduced to the app on Android and iOS in a week or so. Google says more G Suite mobile apps will follow with this material theme design later this year.