Social media platforms are heaven for the people who do not like to talk and a blessing for the ones looking to share their opinions. The new generation has an insatiable desire to stay connected with their friends or I should say “Squad”. They are always online posting updates about life’s happenings.

They want to fly, run… they even want to fall, but the one thing they don’t want is to Log Out of their Social Media Account.

This craze started at the beginning of the 21st century with some blog journals and video games (for the uninitiated they are also a kind of social network). Social Media is like a Pokémon… it keeps evolving with time.

The evolution of Social Media can be divided into 2 sections:

In the PC era social sites were mainly about texting and blogging. There were some Photo and video sharing platforms like MySpace, Orkut, Rediff among others but they did not ‘trend’ until the end of the decade. So here’s a timeline for you March 2002: The first BIG social media platform Friendster.com was released. Friendster was launched even before Facebook and Twitter. Friendster, which once was the most popular website, became a gaming platform in 2011 and then it was shut down in 2012 due to reduced traffic on the website.

December 2002: The social platform for the professionals and corporates LinkedIn was launched. People use it to maintain their “Professional Profile.” In 2016, LinkedIn became the subsidiary of Microsoft.

May 2003: Photo Bucket was launched with an idea to share photos and videos on the internet and earn money. Photobucket has more than 10 billion photos in the server with more than 100 million registered users

February 2004: The birth of the Social Media Giant Facebook was marked. No one knew that this blue and white website will teach millennials a new language (BRB, TTYL, Sup?). It’s the service that has been saving lives by notifying about your Friend’s birthday.  The website that was known as a social media service has now become a brand – THE brands that now own Instagram and WhatsApp too.

Facebook was initially created on Harvard University’s server and it allowed people to make an account with a profile picture. When it was TheFacebook.com, it supported Invitations and Friends requests only.

As Facebook became popular, it constantly updated new features. It was 2006 when it got the News Feeds and Messenger was still a pop-up box dialogue box. The trend “bro like my Profile Picture” started in 2009, when the website got “Like Button.” And please don’t forget all the epic quizzes, Candy Crush requests!

Today it has evolved so much from its primitive version with more features you can count. Going a notch up Facebook now even has a Market Place that offers business over the app – the company is testing Money transfer via Facebook Messenger. Not to mention features such as Story, Groups, Polls, events and more.

February 2005: It was the month when the biggest video streaming website YOUTUBE was registered. YouTube was created by three PayPal employees. In the beginning, YouTube was used to upload “Me at the Zoo” videos (The first ever video on YouTube) but now, you can find anything on the website, from DIY to coaching classes, Music Videos to live streaming, the website has everything.

YouTube was the fastest growing website even before it was acquired by Google for $1.65 Billion in 2006. YouTube has now started a subscription service that will offer special features without any Ads.

March 2006: The web got its tweet-y bird in 2006 when Twitter was launched. The website then allowed users to say anything in 140 characters. There was limit because Twitter was launched as a Messaging platform and back then, the word limit for texts was 140 characters (Yep, you got it right). This is how the trend of sending abbreviationss joined the new pop culture.

At the beginning, it was just a messaging service but with its popularity, Twitter got new features. For example, its most famous features #hashtag and @at were added later when people started using it in their tweet to point something or anyone. Twitter is now a medium to connect with their favorite people, celebs and pages that share the best memes.

Smartphones were becoming common by the starting of the new decade. So coders, innovators and app developers around the world were making applications that would support Smartphones. 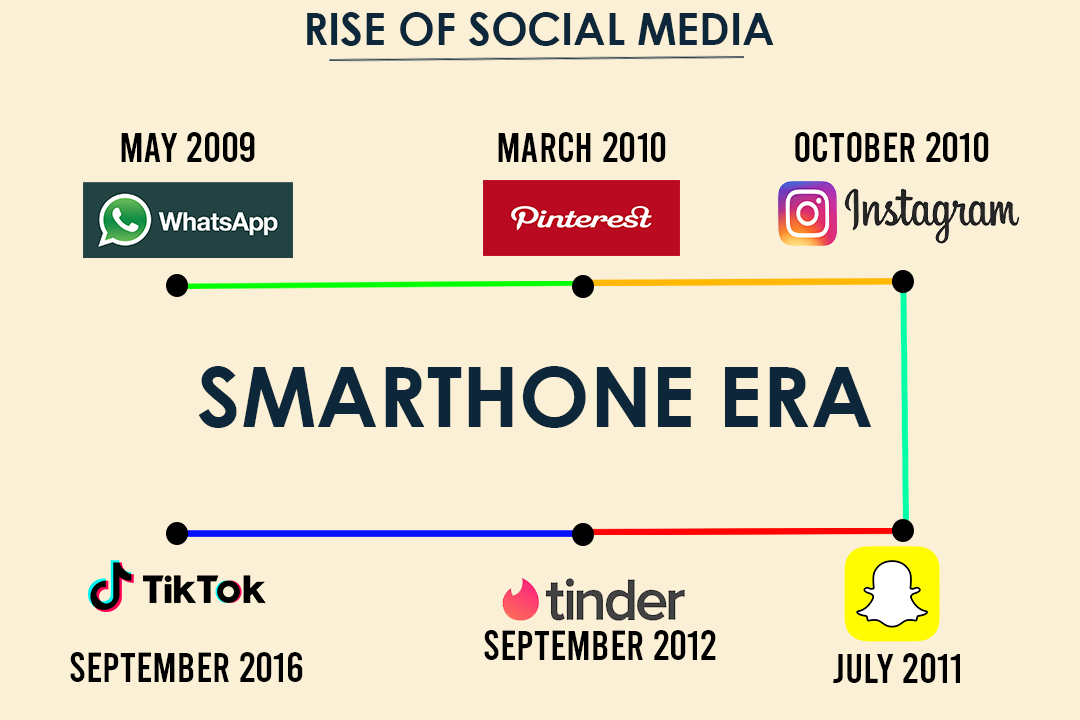 May 2009: WhatsApp was launched by two former employees of Yahoo. It was just a messaging platform that could send messages to your contacts, now it is being used to send the fake news too. Its second update in 2010 brought the “Double Tick” feature that tells the message has been delivered (Also, responsible for increasing the divorce rate worldwide). Around 2012, WhatsApp was made a paid service that had a yearly subscription but then it was removed. Now with WhatsApp, you can make a group video call, send pictures, videos, post status and make a voice call. WhatsApp was purchased by Facebook in 2014 for $18 billion.

March 2010: Pinterest was launched as an invite only site but then it launched its iOS app. Within a year, Pinterest made it to the list of to 50 websites by Time Magazine. Pinterest offers pictures, vectors, poster and so many things in one place that too without any subscription.

October 2010: Instagram was launched and people learned a new way to eat. It was a photo-sharing social media platform. Back then, it was simple, people used to upload their selfie and stuff. There was no breed of Influencers and Insta Model.

It became so popular that 1 million people had joined it within a year. Facebook bought it in 2012 for $1 billion and then Instagram started getting new features. It is now synced to Facebook meaning you can post your food and dog in your Insta and in your Facebook at the same time.

In the year 2013, Instagram first got Insta Feeds and then Videos support. And with the year ending you could send your food photos and the address to your friends with Insta Direct. Instagram introduced Boomerang in 2015. It added Story and Save Posts the next year. In 2018 the Social Media platform received IGTV updates.

July 2011: It is said that Humans evolved from Monkeys and now with the help of Snap Chat, they love to look like a dog with a filter. It is an instant messaging social media platform. Its key feature is self-destructing messages and Cool Filters. Snap Chat was the first one to introduce Stories and Memories.  Snap Chat is popular for its Bitmojis (Emoji with your Face) and face filters.

September 2012: Tinder was released. The dating app, that shows nearby people. It is a swipe to match app. All you have to do is create a profile and upload some good photos.

September 2016: The world famous lip-sync app TikTok came to the world. Users here make short videos and upload them on the app. It is a platform where people can show off their talents. It allows users to share their videos to other social media platforms too. Like any other social site, it has made a new breed of influencers widely known as TickTokers.

Social Media is really famous among young generation and the Industry and the market realize it. Corporate giants promote their products on social media to reach to the younger generation. The ad agencies are hiring Social Media Experts who can make MEMEs and posts. Companies pay Facebook/Instagram/Twitter pages to promote their products. Media and Entertainment industry is also turning to Social Media. Celebrities collaborate with YouTube Channels to promote their new projects. They have even joined the social media to connect to their fans.

If you are into the B2B business, LinkedIn is a platform you should not ignore. It is currently the best social media platform for business-to-business growth. You can check out this post to learn LinkedIn strategies to grow your business.

What about the future of Social Media:

The social media is nowhere going out of trend. There are so many smart brains who are inventing new features and new platforms. The startup culture has made connecting easy and it will keep going. There are so many possibilities for social media, like in future holographic chat in smartphone (Just like science fiction movies) or a buzz feature in WhatsApp where you can vibrate your friend’s phone to show your expressions and feelings.

Solar Eclipse : How PM Narendra Modi won the internet with his perfect reply to a troll
WhatsApp to stop working on Windows Phones from 1st january
Comment