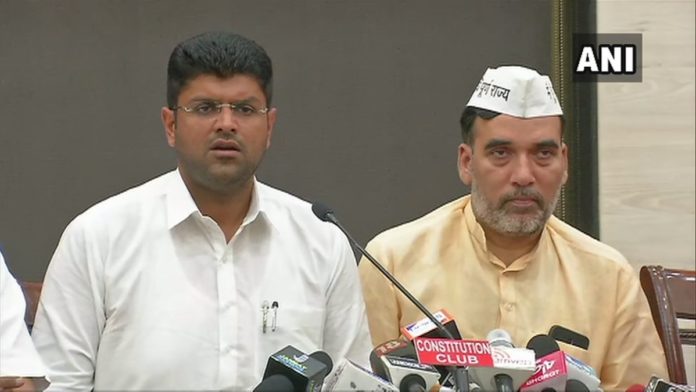 After to failing to forge an alliance with Congress in Delhi and Haryana, the Delhi ruling Aam Aadmi Party on Friday announced its poll alliance with Dushyant Chautala’s Jannayak Janata Party (JJP) in Haryana for the Lok Sabha elections. As per the poll pact, Aam Aadmi Party will contest on three Parliamentary Seats while JJP will have its Candidates on remaining seven Lok Sabha Seats of the State.

Earlier on Thursday Leaders of both the party had held parleys to finalize alliance talks for the mega polls 2019.

Briefing the media announcing the poll tie-up, AAP Senior Leader Gopal Rai said, ‘AAP -Jananayak Janata Party (JJP) have entered into an alliance in Haryana for Lok Sabha elections. JJP will contest on 7 seats and AAP will contest on 3 seats in Haryana’.

While Dushyant Chautala who was also present in the joint presser said, ‘Jhadu (AAP’s election symbol) and chappal (JJP’s poll symbol) will remove obstructions and emerge victorious in the State. He asserted Confidence in defeating BJP and Congress’.

Sources claimed that AAP is likely to field its Candidates on Faridabad, Gurgaon, and either Karnal or Ambala. All these parliamentary seats have a sizeable vote from the Muslim Community and have a mixed population from various castes.

The Development came hours after a fresh round of deliberation between AAP and Congress stuck off Congress don’t want to go with AAP after the Delhi ruling party said no to Congress demand for three seats in national capital out of the seven parliamentary seats.

Earlier Arvind Kejriwal while speaking to a TV Channel said that he wants Congress in Haryana to defeat BJP. Kejriwal said an alliance of AAP along Jannayak Janata Party (JJP) and Congress will easily defeat the Bharatiya Janata Party in Haryana’s 10 Lok Sabha Seat.

While Indian National Congress has also decided to finalize the names of its Candidates in Haryana and Delhi for Lok Sabha Polls 2019, said party sources.

AAP in a run-up the general elections have already announced its candidates on all 7 seats of the national capital after alliance talks a fail alliance talk with Congress. AAP has also announced in UP, Bihar and Punjab for the mega battle of ballots.