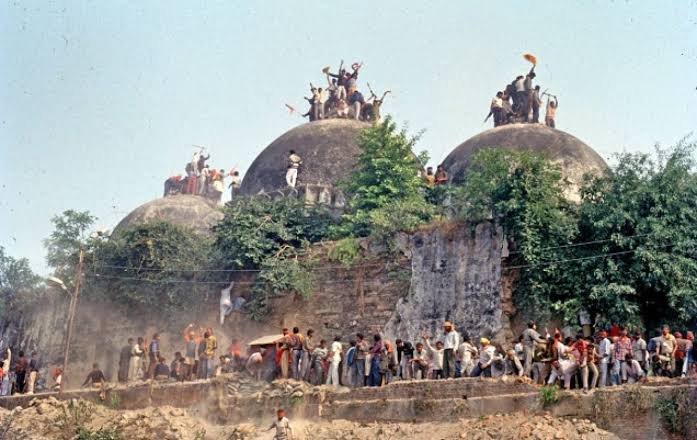 Synopsis: The Court held that the evidence to prosecute the accused was inadequate and that the demolition was not planned in advance.

A total of 49 persons were identified as accused persons in the FIR lodged by the CBI, of whom 17 died in the course of the trial.
Sections 147 (Rioting), 153-A (Promoting enmity between different groups on grounds of religion), 153-B (Imputations, assertions prejudicial to national integration) 295 (Injuring or defiling the place of worship) 295-A (Deliberate and malicious actions intended to outrage religious feelings of any class) and 505 (Statements contributing to religious feelings of any class) were charged for the alleged commission of offences.

The case was heard on a day-to-day basis after the Supreme Court had interfered. In April 2017, the Court permitted the Central Bureau of Investigation (CBI) to file charges against eight BJP leaders for criminal conspiracy. The Court had directed the trial to end within a period of two years and had also directed the judge hearing the case not to be transferred.

In July 2019, the Supreme Court set a time frame within which to complete the trial in the case. The Court was of the opinion that the verdict in the case should be delivered within nine months. As the COVID-19 pandemic had struck by then, this deadline was later extended to August 31.

Furthermore, on 22 August this year, the Supreme Court extended the time until 30 September for the completion of the trial in the case, including the pronouncement of the judgement.

In accordance with the directions of the Supreme Court, it was notified in an order dated 18 September that the verdict will be pronounced today.