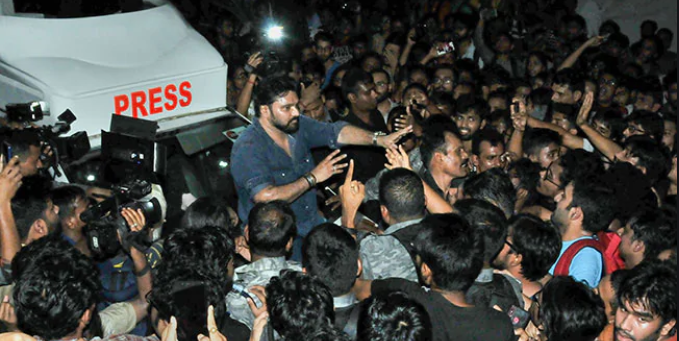 Kolkata: West Bengal Governor Jagdeep Dhankhar took Union Minister Babul Supriyo in his car from Jadhavpur University campus. Supriyo had gone there to attend an event organised by ABVP where he faced protest by SFI & AISA members who were opposing his visit. pic.twitter.com/r2gS1gm9Vs

Babul Supriyo had gone to the Jadavpur University to participate in an event organized by Akhil Bharatiya Vidyarthi Parishad (ABVP), the student wing of the RSS. However, he was detained by the members of left unions such as SFI (Students’ Federation of India), Left-leaning AFSU (Arts Faculty Students Union) and FETSU (Faculty of Engineering and Technology Students Union) and AISA (All India Students Association). The students stopped him from leaving the campus.

The students from the left unions have protested against his entry and shouted “go back” slogans. The students even waved black flags while protesting the leader’s arrival. The minister was heckled to the ground and even pulled by his hair.

Babul Supriyo, speaking on the incident said “I did not come here to do politics. But I am saddened at the absolutely deplorable behavior of some of the students of the university, the way they have heckled me. They pulled my hair and also pushed me.”

On getting the news of gravity of the situation, Bengal governor contacted state chief secretary Malay De and JU vice-chancellor Suranjan Das. He termed the incident as “very serious”. Jagdeep Dhankar is the Chancellor of the University. Suranjan Das reported that he had urged to escort the BJP leader however he refused.

Babul Supriyo commenting on the matter wrote a message on Twitter.

Governor spoke to the VC of #JadavpurUniversity & indicated to him that it was improper for him not to have taken prompt steps in the matter, that can lead to unwholesome results.This is a very serious reflection on the law & order of the state

At last, Jagdeep Dhankar rushed to the college to rescue the BJP leader. Dhankhar had also called Chief Minister Mamata Banerjee in Delhi minutes before his arrival. Mamata Banerjee was in Delhi to meet Amit Shah regarding the issue of NRC.

Trinamool Congress has raised voices against the governor’s move. The party condemned the incident and said that the governor should have taken the step after discussing with the elected government. The party also said that despite the request of Mamata Banerjee, the governor went there. It has been reported that the Chief Minister urged the governor to act as a constitutional head and not take any action at the moment.

The governor and BJP leader were finally able to leave the campus in late evening hours.