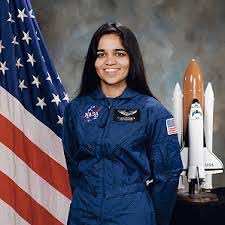 Today is the birth ceremony of Kalpana Chawla.Her name needs no introduction.She was the first Indian women in space .

She first flew in 1972 on the Space Shuttle Columbia. She served on the shuttle as of mission specialist and the main person sleeping the shuttle’s robotic arms.

She was born in Karnal, Haryana. She got a degree in aeronautical engineering from Punjab Engineering elementary school. She moved to America and became a naturalized U.S. citizen in the 1990s. She earned a master’s degree in aerospace engineering from the University of Texas. She got her doctorate from the University of Colorado in 1993. She began flying with people for NASA at the Ames Research the same year.

In 2000, Chawla was selected for her second voyage into space, serving again as a mission specialist on STS-107. The mission was delayed several times, and finally launched in 2003. Over the course of the 16-day flight, the crew completed more than 80 experiments. Kalpana was one of the seven people killed in the Space Shuttle Columbia tragedy on February 1, 2003.

“On one of the night passes, I dimmed the lights in the flight deck and saw the stars. When you look at the stars and the galaxy, you feel that you are not just from any particular piece of land, but from the solar system,” she had said after her first flight.

Kalpana began working at the NASA Ames Research Center in 1988, and joined the Corps in March 1995 after becoming a naturalized US citizen.

In 2000, Kalpana was selected for her second flight as a part of the crew of STS-107. The mission got repeatedly delayed and was finally launched in 2003. On February 1, 2003, the space shuttle disintegrated over Texas while trying to re-enter the Earth’s atmosphere. Over the course of the 16-day flight, the crew completed more than 80 experiments.