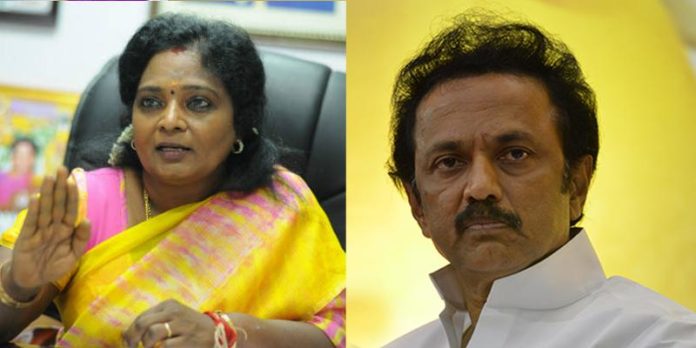 Rubbishing claims regarding her lying about MK Stalin holding talks with BJP for a post-poll alliance, BJP state president Tamilisai Soundararajan said that she will put forth the evidence as and when required.

BJP state president of Tamil Nadu, Tamilisai Soundararajan, on Wednesday said that she will present evidence for proving her point that the DMK Chief MK Stalin had held talks with the BJP for a post-poll alliance with the party in the state.

Talking to media persons at Thoothukudi earlier, Tamilisai Soundararajan had said that Stalin was in talks with BJP over alliance.

“Neither is (Prime Minister) Modi lying nor am I lying. The DMK and the Communists may have the habit of lying, but I don’t come from a family that lies. I am a very honest person. What I say may have some reasons…We will give proof when we have to. The DMK is like a chameleon. There is no doubt about that,” she added.

Clarifying the BJP’s decision on alliance in the state, Soundararajan said, “We are very clear on our alliance. We are with AIADMK and have a very strong alliance.”

While responding to claims against him trying for a post-poll tie-up with the party DMK Chief MK Stalin made it clear that he had never tried for such an alliance and asked as if to whether Modi and Soundararajan would quit politics if they fail to prove their point. Stalin also mentioned that he had only named Mr. Gandhi when it came to the candidature for the position of the Prime Minister.