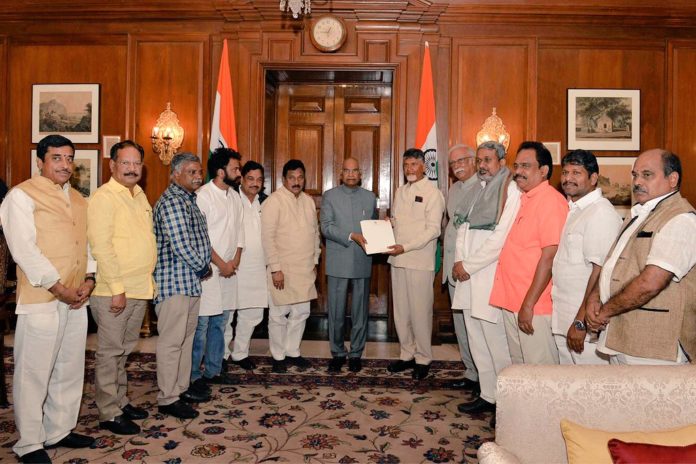 A delegation led by Andhra Pradesh Chief Minister N Chandrababu Naidu on Tuesday submitted a memorandum to President Ram Nath Kovind regarding the status of implementation of assurances made in the parliament during the passing of Andhra Pradesh Reorganisation Act, 2014.

Earlier, Led by Chandrababu Naidu himself, Telugu Desam Party (TDP) held a protest march from Andhra Bhavan to Rashtrapati Bhavan over demand for special status for the state.

The Demand for Special Status also gained momentum with Opposition Parties and their leaders throw weight behind the Andhra Pradesh Chief Minister.

Speaking at his long day protest, Andhra Pradesh Chief Minister termed this as a battle of  ‘Self-Respect’. He said, ‘If you won’t fulfill our demands, we know how to get them fulfilled. This is about self-respect of people of AP. Whenever there is an attack on our self-respect, we won’t tolerate it. I am warning this govt&particularly the PM to stop attacking an individual’.