The Indian Wire » Politics » Being Denied to land Helicopter; CM Yogi to travel by road to hold rally in Mamata’s Bastion 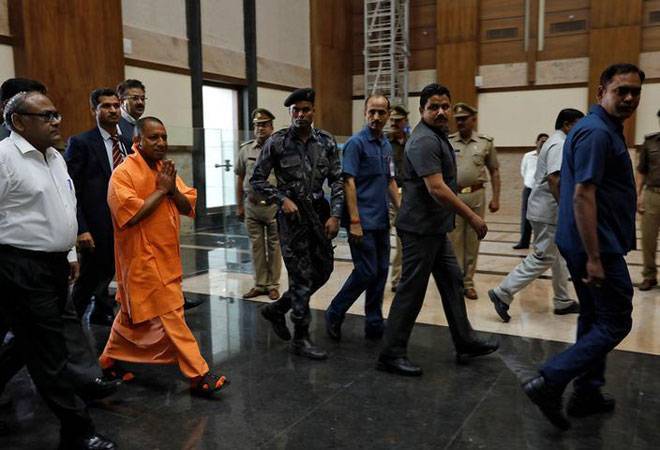 After being denied to land his Chopper in Mamata’s Bastion, Uttar Pradesh Chief Minister Yogi Adityanath on Tuesday will touch down in Jharkhand’s Bokaro and then travel to West Bengal’s Purulia district by road to address a public rally. The Uttar Pradesh Chief Minister will leave for Purulia after the adjournment of the Vidhan Sabha session today. Yogi Adityanath is slated to address the rally at around 3:30 pm.

As per the original plan, CM Yogi was slated to address two rallies in West Bengal on February 3, one in North Dinajpur district’s Raiganj and the other in South Dinajpur district’s Balurghat. However, the TMC government led by Mamata Banerjee declined permission for Yogi’s chopper to land for both rallies without any prior notice.

Later in the day, Yogi addressed the rally in Raiganj via telephone and accused Banerjee of carrying out“shameful” activities. Earlier Similar situation outbursted during BJP’s National President Amit Shah‘s visit to the state on January 22. A controversy over the Visit erupted after West Bengal Government refused to give permission to the state BJP to land party president Amit Shah’s chopper at the Malda airstrip.

The Bhartiya Janta Party condemned the blocking of rallies in the state. The Bhartiya Janata Party also while also criticizing her government for the ongoing tussle between the CBI and the state police. Uttar Pradesh Health Minister Sidharth Nath Singh said, “Mamata ji has created an unconstitutional and undemocratic atmosphere in West Bengal. The CBI vs Mamata situation in the state clearly shows that democracy is in peril there. When Narendra Modi ji was the Gujarat chief minister, he fully cooperated with agencies when he was under probe. He was also in your position and he showed that you have to cooperate with the law and not fight it”.

“During our meeting with the poll panel officials, we apprised them of the extremely dangerous situation in West Bengal where the central government officers are being threatened, allegedly detained and the raised the issue of repeated denial of permission by the TMC government to BJP leaders and their rallies across the state,” Mukhtar Abbas Naqvi after meeting the Poll Panel on Monday.

Mamata Banerjee launched her dharna in Kolkata on Sunday night amidst unprecedented face-off with the Centre over CBI versus state police issue.