Ahead of the protest on 5th November, Congress party has called a meeting of opposition parties on November 4 to seek their support on its 10-day nationwide agitation. Congress has announced to launch a nationwide protest on November 5 against the anti-people economic policies and decisions of Prime Minister Narendra Modi.

It has been reported that the top-brass leadership of the grand old party is gathering the like-minded people on the issue to corner down the Central government. The protest will take place in the national capital from 5th November to 15th November. Senior party leaders will be addressing the press conferences from district to state level.

The agitation will saw the protest over the issue of economic slowdown, unemployment, farmer’s situation & the Regional Comprehensive Economic Partnership Agreement. It is expected that the party will hold 35 press conferences between November 1 and 8 for the same.

Previously, the party has also issued an official notification to announce the details of its protest. Party secretary KC Venugopal had said that the unemployment rate is at a 45 year high with 8.1 percent. Moreover, the issue of rising prices, collapse of the banking system and farm distress is a dangerous precedent for the nation. 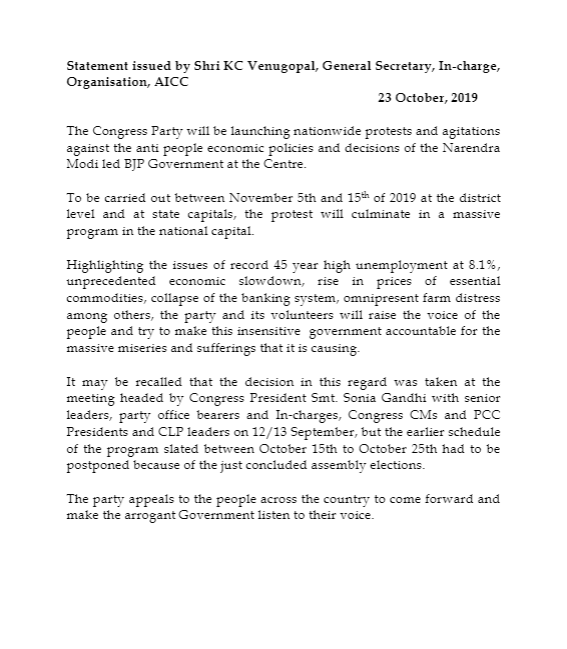 Ghulam Nabi Azad is said to be in touch with few opposition leaders over the matter. It is believed that the support of opposition parties will lend more credibility and strength to the protest. The meeting of opposition parties is also likely to see the discussion over the strategy for the upcoming winter session of the Parliament which will start from November 18.