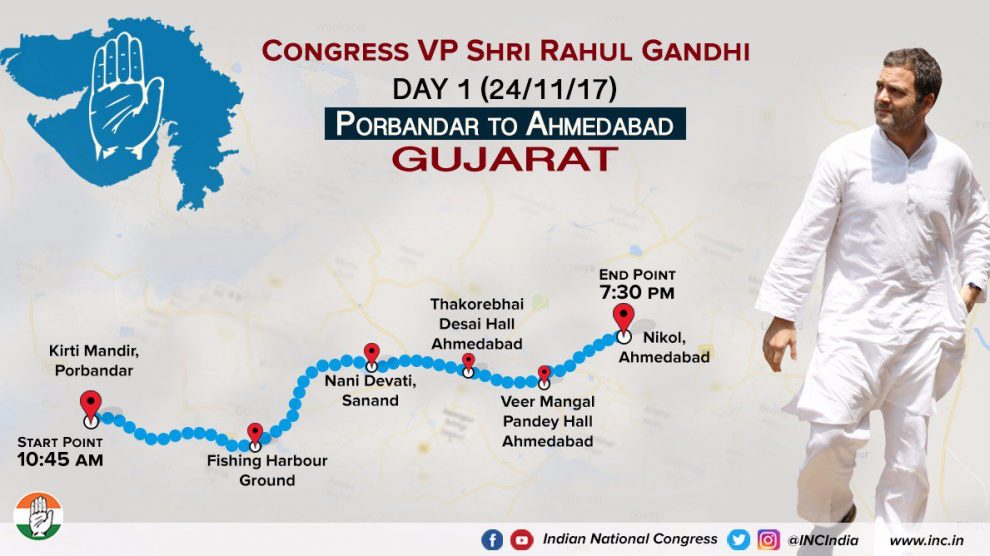 Rahul Gandhi is on a 2-day campaign tour of Gujarat starting from today, focusing on interaction with Dalits, fishermen, teachers & doctors.

Congress Vice-President Rahul Gandhi began with his two-day tour to the poll-bound Gujarat from today covering the Saurashtra and the South Gujarat region, which are set to face the election in the first phase on 9 Dec.

As per his itinerary, Rahul is scheduled to address five rallies and interactions today. He began the campaigning with the interaction with the fishermen in Porbandar than he will be visiting the Dalit Shakti Kendra to interact with the Dalits and accept the Tricolour flag. From there on he will be holding interaction with representatives from public health sector at Ahmedabad, then he will be meeting with the teaching community and last he will be addressing the Navsarjan Jan Sabha at the open ground in Ahmedabad.

After landing at the Porbandar airport Congress vice-president interacted with fishermen at Navsarjan Maachimaar Adhikar Sabha in Porbandar.

He then visited the birthplace of Mahatma Gandhi, Kirti Mandir and paid a homage to the father of the nation. Visiting the temples and offering prayers have become a new trend for the Congress, as the party is trying hard to clean its anti-Hindutva image.

His temple visits are being seen as a soft Hindutva card being played by the Congress ahead of the polls in order to gain the faith of the Hindus as well, which seemed to be a little inclined towards the BJP. According to the sources, “The Muslim community is completely on Congress’ side of Gujarat. Therefore these visits are an attempt to come on par with the BJP so that the BJP’s attempt at polarisation is not successful.”

While interacting with the fishermen, Rahul hit back on the BJP government and Narendra Modi on the same issues of note ban, GST and the party favoring only a few industrialists.

During his address, comparing the works done by Congress and BJP, Rahul said that “Congress had given Rs 33,000 crore for NREGA. Narendra Modi gave the same amount for Tata Nano. You lost your land, water, electricity for Tata Nano. And now, you are telling me that you did not see Tata Nano anywhere. Are you driving Tata Nano? The truth is that if a big industrialist asks for money from Narendra Modi, he is ready to give Rs 33,000 crore to that one person. But if every fisherman approaches him, they will not even get Rs 300 crore.”

Assuring the fishermen community that Congress will take care of all their needs if voted to power, Rahul said that “Narendra Modi used demonetization to convert the black money held by many people into white money, but Congress will pay attention to all your needs and problems.”

In order to win the faith of the fishermen in Porbandar, appealing for votes, the Congress Vice President said that “There should be a separate ministry for fisheries in Gujarat. And if Congress comes to power in Gujarat, we will do this.” He also asserted that Gujarat does not belong to five or ten industrialists. It belongs to the farmers and fishermen.

Taking a jibe at the monthly radio programme of Prime Minister Narendra Modi, ‘Mann ki Baat’ the Congress leader mocked that “Congress party and I do not want to tell you our Mann Ki Baat. We want to hear your Mann Ki Baat. The Congress will win the elections in December. Our doors will be open for you when that happens. Your Mann ki Baat will be heard within those doors then.”

Rahul is on a two-day tour of Gujarat ahead of the first phase of the assembly elections on 9 Dec. Prime Minister Narendra Modi is also set to begin the last leg of BJP campaigning in the poll-bound state from 27 Nov.