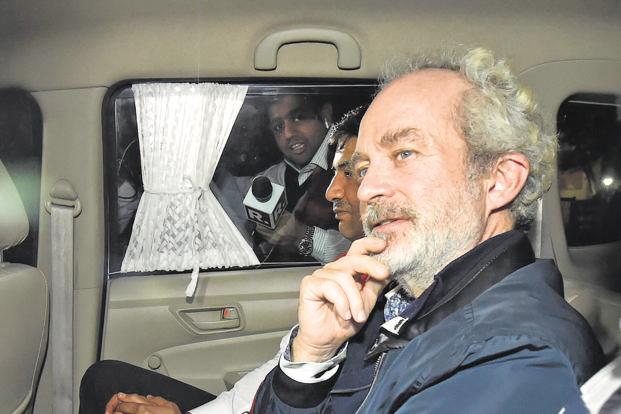 A Delhi court on Tuesday extended by one day the judicial custody of alleged middleman Christian Michel, who was arrested in the AgustaWestland VVIP chopper case. Special judge Arvind Kumar extended his custody in the case lodged by CBI.

Earlier on February 18, Court has reserved the Judgment order on Christian Michel’s bail plea. The Court said that the order will be passed on February 26. Earlier Probing agency CBI opposed the Christian Michel’s (the alleged middleman in VVIP Chopper Scam) bail in Delhi’s Patiala House Court. The Investigation Agency said ‘this court has taken cognizance in both ED and CBI charge sheet. Once the cognizance has taken then accused cannot ask for statutory bail.’

Both ED and CBI filed their reply in the Court strongly opposing the Bail Plea filed by the Christian Michel.

Earlier, on February 8, Christian Michel arrested in the Agusta Westland VVIP chopper case,  moved to a court seeking bail in cases by the Central Bureau of Investigation and the Enforcement Directorate (ED), saying the charge sheet against him was not filed within the stipulated time frame of 60 days.

The Enforcement Directorate on December 22 arrested British National Christian Michel, the alleged middlemen in the AgustaWestland VVIP Chopper Scam. Christian Michel was produced before the Special Judge Arvind Kumar where the ED sought his custody for 15 days.

Michel is among three foreign nationals that have been Charge-sheeted by the Investigation Agency. Others Include – Guido Haschke and Carlo Gerosa.

The Central Bureau of Investigation (CBI) in this findings has alleged there was an estimated loss of 398.21 million euro (approximately ₹2,666 crore) to the exchequer in the deal that was signed on February 8, 2010, for the supply of VVIP choppers worth 556.262 million euro.

The CBI on September 1, 2017, had filed a charge sheet in the case in which former IAF Chief SP Tyagi and British national Christian Michel were named among the accused. Nine others were also named in the charge sheet in connection with a bribery case in the VVIP chopper deal.

While the Enforcement Directorate in his Charge Sheet dated June 2016 has alleged he received 30 million euros (about ₹225 crore) from Agusta Westland.

The Foreign National Michel was arrested in UAE and extradited to India on December 04.