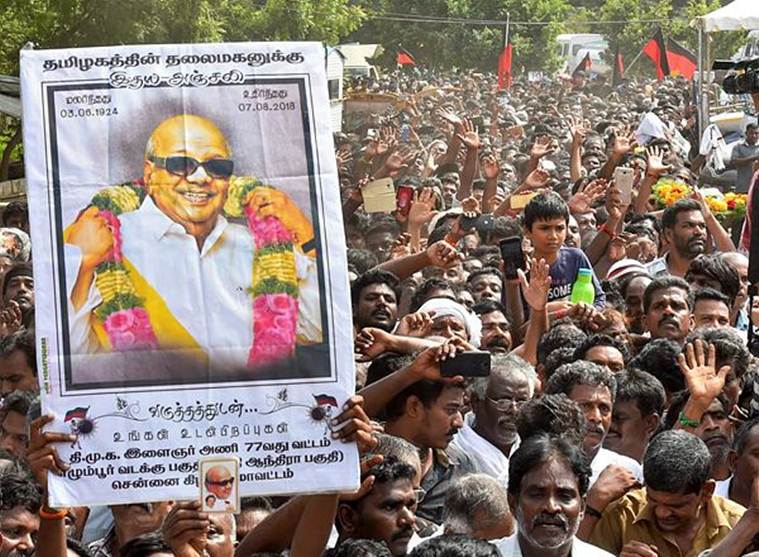 Owing to the painful demise of DMK Chief M. Karunanidhi, Tamil Nadu government has declared a statewide holiday on August 8. Schools, colleges, and all government offices will remain closed today.

The DMK leader had been admitted to the hospital on July 28 due to a urinary tract infection which was followed by the development of a high fever. He, however, breathed his last yesterday at 6:10 pm.

The information was made public the same day at 6:41 pm. Condolences since have been pouring from all over the state. Even social media is flooded as leaders and supporters have gathered to pay their respects.

In the wake of the news, the state government announced a mourning period lasting 7 days. This includes today, August 8, when all these institutions are shut.

This period implies the cancellation and postponing of any programmes or events being hosted by schools and colleges. New dates will be shortly released.

M Karunanidhi’s body is being cremated in Chennai’s Marina beach. This is only after the supreme court allowed the burial to take place at the beach. He will be buried at the Anna Square memorial which is along the Marina beach. While the supporters walked along the ambulance carrying the body, there was a stampede that followed due to the same at Rajaji Hall and the police intervened by lathi-charging the crowd.

Fondly remembered as ‘Kalaignar’, he abandoned a flourishing career in the Indian cinema to work towards the Dravidian movement and general politics. This path has been popular with his contemporaries such as  MG Ramachandran and J Jayalalithaa.

He had become the Chief Minister in 1969 after DMK ideologue CN Annadurai had passed away while still in office.

Ahead of 2019, Yogi Adityanath to appoint Lok Kalyan Mitras to promote bjp’s developments
Article 35A: Case adjourned; 1 out of 3 Judges not available
Comment