After the Cabinet’s approval, the formal exercise of survey and mapping of colonies will begin; as told by a senior DDA official.

NEW DELHI: The Delhi Development Authority (DDA) will assign Survey of India (SoI) to map unauthorised colonies in the city. Now, only the Cabinet’s approval remains.

The civic body took some Geographic Information System (GIS) images as part of the survey on unauthorised colonies. Based on the images, the government fixed the boundaries as per the cut-off date for regularisation decided by them. Officials of the Delhi government as well as DDA mutually agreed upon the overall process.

“Initial exercise has begun. Patwaris will start checking areas under their limits. The SoI has prepared a schedule also, but work will start following the formal approval of the Cabinet note,” said a Delhi government official.

A senior DDA official confirmed that formal exercise for mapping colonies would begin after the Cabinet approval.

“The Centre sent a note to the Delhi government on the issue, after which CM Arvind Kejriwal did a press conference announcing the regularisation of colonies. All departments were asked to send their comments on the note, which have already been given. DDA will forward the comments to the urban development ministry,” said the official.

In February, Urban Development Minister Satyendar Jain cleared a proposal to use drones for mapping boundaries of the unauthorised colonies. The decision was taken by the AAP government after four previous attempts in as many years failed to produce any result.

In April 2015, the government engaged two agencies to undertake the survey of 893 unauthorised colonies. The estimated time for the entire project to finish was two years. However, the survey remained incomplete. It covered only 372 colonies and there were major discrepancies in the work.

“After the previous surveys failed, the civic body decided to use a drone for the survey. In fact, the revenue department surveyed an unauthorised colony using a drone. It required more time to capture the data from the field, its processing, and verify the accuracy. According to an estimate, the whole exercise would take two years. However, the Centre has decided to take up the job,” said the Delhi government official. 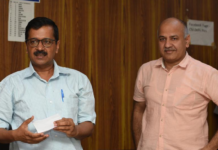