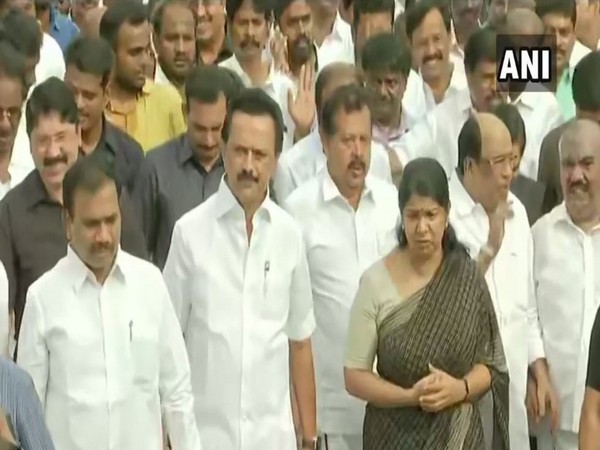 Dravida Munnetra Kazhagam (DMK) chief MK Stalin, party MP M Kanimozhi along with other leaders of the party on Wednesday led a procession remembering DMK Patriarch M Karunanidhi on his first death anniversary. The procession led to the memorial of the Karunanidhi situated at Chennai’s Marina Beach.

Among many big leaders of the party, Former Union Defence Minister AK Antony also participated in the procession. While the party workers carried a garland picture of the leader.

In a tweet, MK Stalin remember the Karunanidhi and said, ‘It’s been a year since the sun has gone to rest! Lead artist is half your power! Give heart to Anna! Give the word sibling!
May the sun never cease!’, MK Stalin said in Tamil.

In another tweet, he said, ‘Peace march, beginning with the statue of Anna on the Anna Road, carrying his memoirs on the anniversary of the artist’s death’.

Fondly remembered as ‘Kalaignar’, Karunanidhi had a flourishing career in the Indian cinema to work towards the Dravidian movement and general politics. He had become the Chief Minister in 1969 and was the longest-serving Chief Minister of the state.

After the death of Karunanidhi, MK Stalin handled the party’s campaign single-handedly and registered a massive victory in the state in the recently held national polls.

MK Stalin’s DMK swept Tamil Nadu in the national elections 2019. DMK who led the Secular Progressive Alliance of which Congress, communist parties, Vaiko’s MDMK and Dalit outfit VCK were a part, had won 38 of the 39 Parliamentary seats that went to polls in Tamil Nadu and Puducherry.

While AIADMK-led alliance, of which BJP was a party, managed to win a single seat in the State.