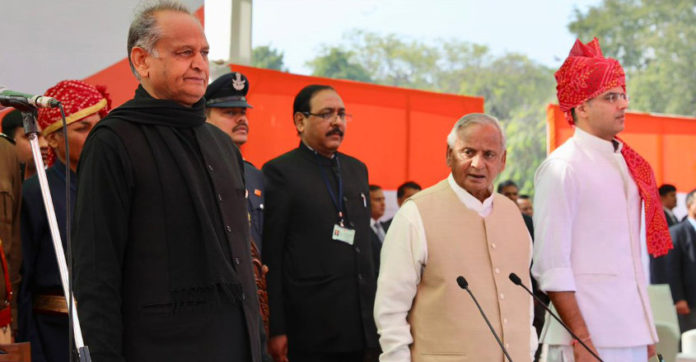 The Congress in a bid to use the swearing-in ceremony as the opportunity to showcase the opposition unity has given invitations to all parties who can come in alliance in a run-up to the general elections 2019. But in a major setback to the Congress, prominent opposition faces Mamata Banerjee, Mayawati and Akhilesh Yadav choose to skip the ceremonies in all three states – Madhya Pradesh, Rajasthan, and Chhattisgarh. Though these parties have sent their representatives to the ceremony.

While, In Madhya Pradesh, Congress leader Kamal Nath was sworn in the 18th chief minister of Madhya Pradesh Monday. Governor Anandiben administered the oath of Office to Kamal Nath.

Earlier on Thursday after hours of Deliberation Congress Picks nine-time Parliamentarian Nath as the Chief Minister of the state, where Congress is coming back to power after 15 years.

In recently concluded State Assembly Polls, the Congress secured 114 seats in the recently concluded Madhya Pradesh Assembly Elections, falling two short of the majority in the 230-seat Assembly. However, help came in the form of both BSP and SP extending support. BSP Supremo Mayawati on Wednesday extends its support to the Congress in Madhya Pradesh and Rajasthan in a bid to keep BJP away from power. Former Uttar Pradesh Chief Minister and Samajwadi Party Chief Akhilesh Yadav also extend its support to Congress. The two have 2 and 1 seat respectively in the Assembly.

The state assembly elections of all five states concluded on Tuesday with Congress registering a resounding victory in three Hindi heartland states – Madhya Pradesh, Rajasthan, and Chhattisgarh.
In Chhattisgarh, Congress Senior Leader Bhupesh Bhagel will also take an oath for the office on Monday, after the party declared him as the CM Candidate on Sunday.