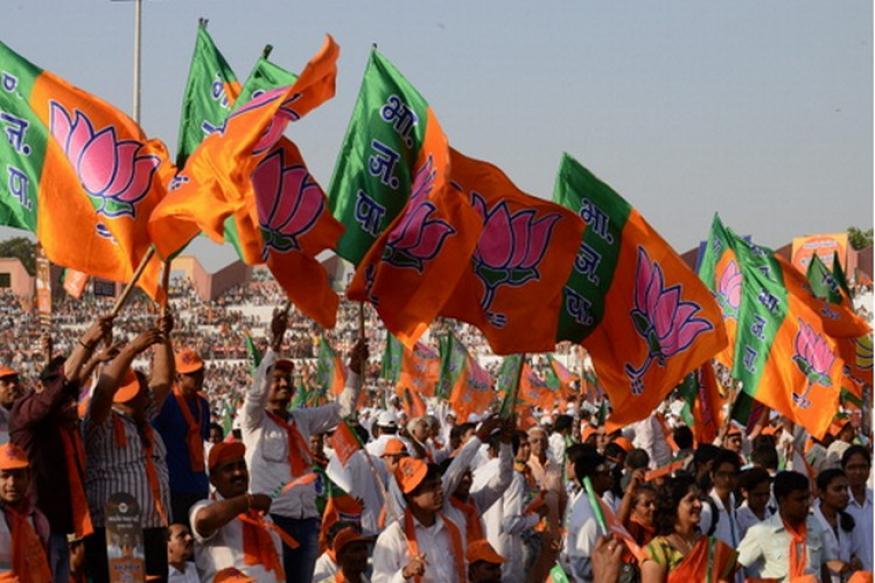 Gujarat assembly elections have literally become a battleground, be it between the political parties, communal parties or for that matter even within the party. With less than a month left for the state to go for polls, while on one hand, BJP was already fighting the Congress, but it seems like the start are not favoring the party as the ruling Bhartiya Janata Party is now also facing difference and protest within the party.

BJP and Congress were engaged in the ‘who blinks first’ game to release the candidate list, each waiting for the other to release the list first. However, 21 is the last date for filing the nominations and keeping in mind the rapidly changing political equations in Gujarat, BJP released its first date on Friday, 17 Nov.

Before the release of the list, the sitting MLAs and the hopeful candidates were all cross fingered seeing the history of BJP ticket distribution. BJP has always had a track f showing the exit door to sitting MLAs and giving tickets to new faces. Though this policy of the party seems to have backfired this time in the already tensed situations in Gujarat.

After BJP filed nominations for 70 candidates, several BJP members, unhappy with the list staged a protest at ‘Kamalam’ the BJP workers warn the party of consequences over ticket distribution. These unhappy members, warned the party to be ready to face the consequences if they were unable to meet their demands. Many party workers also took on to the streets to protest against BJP.

The protest held mixed sentiments, as some were protesting against the dropping of the sitting MLAs, while some expressed dissident over the repetition of the unpopular MLAs.

The BJP has so far announced 106 candidates out of a total of 182 seats by releasing two lists. The angry members even went to the extent of threatening the party of resignation and facing defeat in the polls, which are to be held next month in two phases. While a few BJP members admitted that dissidence after the ticket allocation by the party is not very new in BJP. A mid-level Ahmedabad-based worker also expressed the loss that BJP is facing in the absence of Prime Minister Narendra Modi, to lead the polls. “Absence of Modiji has emboldened the ambitious candidates,” he said.

Heavyweight Rajput leader IK Jadeja marched to Kamalam on Sunday along with many of his supporters for being denied the ticket. BJP gave Dhanji Patel, a first-timer, the ticket instead of Jadeja. The possible reason for fielding Djanji could be that he belongs to the same Leuva sub-caste as Hardik Patel.

The protestors argued that while Dhanji Patel is only a new face and Jadeja has been a well-acquainted figure amongst the people of Dhrangadhra and workers of Wadhwan. Jadeja’s supporters demanded that the people wanted to see him as their representative and not any new face.

Another BJP MP from Patan, Liladhar Vaghela, has threatened that he will resign if his son Dilip is not fielded from Deesa in North Gujarat. Likewise, BJP MP from Panchmahal, Prabhatsinh Chauhan, has said that he will file nominations as an independent candidate after his wife was denied the ticket.

Workers from Nikol in Ahmedabad also staged a demonstration against the ruling BJP on Sunday, protesting the repeat of Ahmedabad BJP city chief Jagdish Panchal from the constituency. They demanded that Panchal should not be given the ticket in wake of his arrogance and high handedness.

Similarly, workers from Narmada district also opposed the renomination of sitting Nandod (ST) MLA Shabdsharan Tadvi, arguing that he had long lost his popularity and BJP would have to face defeat if he was fielded. The protestors said that Tdvi was unable to bring any development to the constituency in the last five years.

Narmada district BJP secretary Karansinh Parmar warned that “The party’s decision to renominate Tadvi could cost dearly in the polls as his popularity has hit rock bottom in the last five years. As a sitting MLA, Tadvi neither visited villages nor did he bring any developmental work (to the constituency). Despite he lacking any ground connect, the party has decided to repeat him.”

The angry Narmada district BJP secretary said that “We all have come here to warn the party leaders that if he is going to contest, the BJP will be eliminated from Narmada district this time.”

Several BJP members from other constituencies also gathered at the party headquarters protesting the list issued by BJP. Leaders from Kheralu seat in Mehasana, Nikol and Naroda seats in Ahmedabad and from Anklav in Anand district were also present.

BJP has renominated Jagdish Panchal, sitting MLAs for Nikol seat. Furious over his renominations for Nikol, a Patel-dominated area, many demanded his removal saying that “Panchal is known for his dictatorial style of working. Though we had made several representations to the party leaders about Panchal, he is given ticket once again. If he is going to contest, the BJP will definitely bite the dust from Nikol.”
A party leader form Naroda said that despite their repeated requests to the party to field a Hindu candidate from the constituency this time, their demand was not met and once again a Sindhi candidate Balram Thavani has been given the ticket.
Though Naroda is a Hindu-dominated seat, the BJP has been giving tickets only to Sindhis since long. Though we have urged the party to give a ticket to a Hindu this time, our demand is not met. Youth BJP workers may refrain from the election if Thavani is not changed,” the party worker said.
Another protest was raised against Hansakuvarba Raj’s candidature from Anklav seat. The BJP leaders claimed that “Hansakuvarba Raj is a school teacher and she is not known to any of the party workers of Anklav, which is held by a strong Congress MLA at present. The BJP should have refrained from allotting ticket to such a weak candidate. If she is not replaced, the party workers will not campaign in Anklav.”
As many as 22 BJP councilors of the Gandhidham municipality went to Bhuj and gave their resignation from party’s primary membership in order to show their protest against the selections of Maltiben Maheshwari instead of Ramesh Maheshwari. The party office in Bhuj in Kutch district was also closed to demonstrate protest against the BJP.
Responding to all the protest and anger demonstrated by various party members, Gujarat Chief Minister Vijay Rupani said that all the members will be back to work after venting their anger. In his statement to the reporters in Gandhinagar, Rupani said that “Though they are protesting against ticket allocation at present, they will get back to work once they are done with venting their anger.”
BJP’s election campaign committee chief Kaushik Patel also still claimed to win 150 seats. In his statement to the press, he said that “Some party workers have come here to make a representation. We have listened to them. BJP’s campaign is going in full swing. With the support of party workers and people, we will win over 150 seats.”
Seeing the recent developments in Gujarat, it seems like the problems for the already anxious party has only increased in the poll-bound state. The voting for the first phase will be held on 9 Dec and the second phase on 14 Dec. The results of Gujarat and Himachal Pradesh assembly polls will be announced simultaneously on 18 Dec.