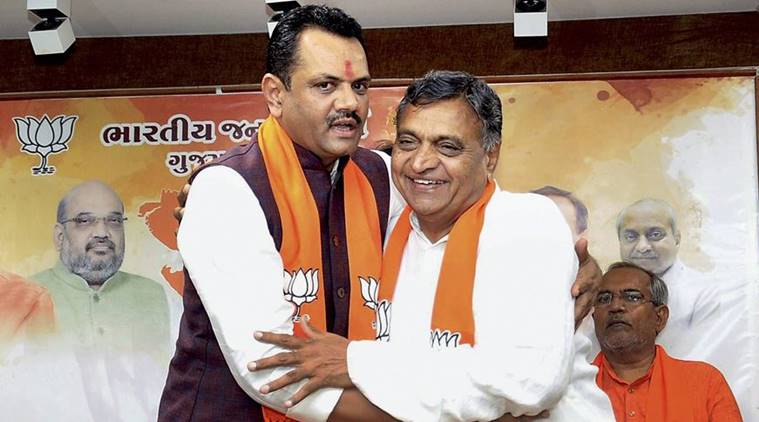 Congress suffered another setback in Gujarat on Thursday as three of its MLAs quit the party to join the BJP.

It seems like the stars are not in the favour of Gujarat Congress as it faces tough times keeping its party united in the state. Recently Gujarat Congress witnessed cross voting in the Presidential elections when 8 of its MLAs voted for the NDA candidate Ram Nath Kovind and then the resignation of Shankersinh Vaghela was a blow to the party.

The party faces another jolt as three of its MLAs, Balwantsingh Rajput (Sidhpur), Tejashree Patel (Viramgam) and Prahlad Patel (Vijapur) quit the party to join the BJP on Thursday. As soon as the MLAs joined BJP, the party immediately declared Balwantsingh Rajput as its third candidate for the Rajya Sabha elections scheduled to be held on August 8. Its other two candidates are party chief Amit Shah and Union minister Smriti Irani.

With Rajput as the third candidate for Gujarat Rajya Sabha election, the possibilities of Ahmed Patel getting re-elected is getting weaker. Currently, the party’s statistics says that it has 54 seats in the 182-seat assembly and each Rajya Saba member needs 47 votes to win. Though Gujarat Congress general secretary, Ashok Gehlot has assured that the Rajya Sabha elections will not witness any cross voting, there are possibilities few of its members may ditch the party again.

Tejashree Patel said that she quit the party as she believes that BJP s the ruling party and she will be able to serve the people better with BJP. She also complained that the Congress was not paying any attention to the Patidars’ reservation demand. She further added that she has been telling the party to meet Patidar Anamat Andolan Samiti leaders from past one and a half year but the party did not pay any heed. She also admitted that she felt insulted at the party’s decision of fielding an outsider Khodabhai Thakore instead of her. She said that the party lacked discipline.

While Prahlad Patel did not give any comments regarding his resignation according to the sources Balwantsingh Rajput resigned because he was intentionally being targeted by his colleagues. Rajput’s son is married to Vaghela’s granddaughter, in his resignation letter to Congress Chief Sonia Gandhi he said that “I have worked sincerely for the party since 1982 but for the last few years, the Congress party has been trying to harm my reputation through my colleagues intentionally. Some party colleagues have tried to hurt my reputation in the party due to my family relations with Shankersinh Vaghela.”

Responding to the recent resignation Ashok Gehlot accused BJP of plotting conspiracy against them and reassured that Ahmed Patel will win the polls.