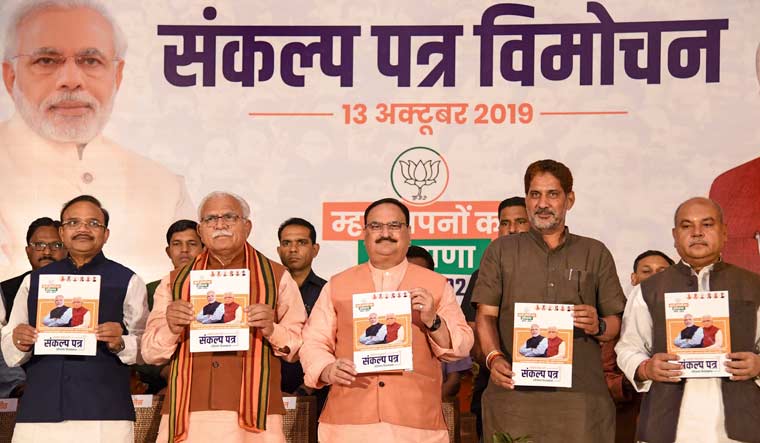 In a bid to attract the voters of state ahead of Haryana assembly polls, Bhartiya Janta Party released its manifesto on Monday. The manifesto of the saffron party was titled as “Mhara Sapno ka Haryana“. It contains 15 chapters and 248 points.

The manifesto release saw the presence of Chief Minister Manohar Lal Khattar and the party’s working president Jagat Prakash Nadda.  Party’s state unit president Subhash Barala was also present on the occasion. CM Manohar Khattar said that the manifesto is on the lines of “Ram Rajya“.

Speaking on the manifesto, Jagat Prakash Nadda said “It is a commitment paper and it is a serious and studied document. A lot of effort has gone into its preparation. This is a pragmatic and practical paper.”

Reacting to the manifesto of the saffron party, Kumari Selja has termed it as “Jumla patra”. She further said that the ruling party has not delivered on its earlier promises. Congress party had also released its manifesto earlier in the previous week.