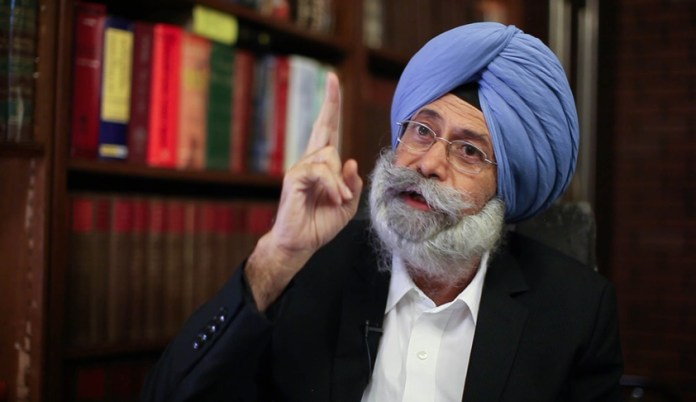 A day after leaving Aam Aadmi Party, Senior Advocate and Former Punjab Leader HS Phoolka asserted that the move to convert the anti-corruption movement into a Political Party was ‘wrong’ he said while addressing a Press Conference in New Delhi.

Senior Advocate Phoolka announced his disassociation from the Kejriwal led party on Thursday through an announcement on Social networking site, Twitter. Phoolka wrote, “I have resigned from AAP & handed over resignation to Kejriwal ji today. Though he asked me not to resign but I insisted. Will be briefing media tomorrow (Friday) at 4pm at Press Club, Raisina Rd, New Delhi to explain the Reason of leaving AAP & my further plans”.

I have resigned from AAP & handed over resignation to Kejriwal ji today. Though he asked me not to resign but I insisted.
Will be briefing media tomorrow at 4pm at Press Club, Raisina Rd, New Delhi to explain the Reason of leaving AAP & my further plans.

HS Phoolka on Friday also said that this is the time ‘recreate’ movement like 2011 Anna Movement. We should recreate a movement like the one created by Anna Hazare in 2011. Those who have left AAP need to unite to form an organization parallel to political parties,” while voicing that the decision to convert political party out of the Janlokpal Movement was wrong.”We will form a big organization within six months,” he added.

The AAP was formed by Arvind Kejriwal and others following the anti-corruption movement led by Anna Hazare in November 26, 2012.

Senior advocate, Phoolka who has been leading a Legal fight in 1984 Anti-Sikh Riots said, “After sending Sajjan Kumar to prison, I will now ensure that Kamal Nath and Jagadish Tytler are sent to jail.” He added, “Justice For 1984 Victims My Life’s Mission”. 1984 Anti-Sikh Riots: Sajjan Kumar surrenders before Karkardooma Court, sent to Mandoli Jail

Phoolka, who had launched a campaign to make Punjab drug-free, said he will continue with his campaign with “full force”. However, he rubbishes all claims of him contesting the upcoming Lok Sabha 2019.

HS Phoolka was reportedly upset with the AAP Leadership over the controversy in connection to an amendment that suggested withdrawing the Bharat Ratna of late Prime Minister Rajiv Gandhi for his purported failure in controlling the violence during 1984 riots. Manish Sisodia clarifies AAP fiasco, says Alka Lamba not resigning; No mention of Rajiv Gandhi in original resolutio

Phoolka said his resignation as an MLA of Punjab Assembly has not been accepted by the Speaker. Accusing Amarinder Singh Government of its failure in initiating action against those named in sacrilege of the Sikh holy book the Guru Granth Sahib in 2015 incident, He has resigned as the Punjab Lawmaker in October 2017.