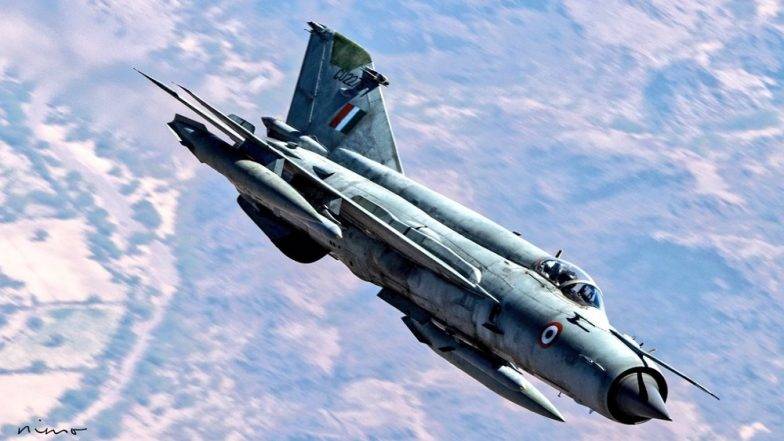 On Friday, a Mig-21 fighter jet belonging to the IAF crashed in Bikaner of Rajasthan, the crashed aircraft reportedly suffered a bird hit.

However, the pilot is said to have ejected safely.The Mig-21 fighter plane was on a routine mission.

The plane took-off from Nal, near Bikaner in Rajasthan. A Court of inquiry is going to investigate the matter.

Visuals: MiG-21 aircraft on a routine mission crashed today after getting airborne from Nal near Bikaner. The pilot of the aircraft ejected safely. Court of inquiry will investigate the cause of the accident. #Rajasthan pic.twitter.com/2HnWciPEB8

According to Sharma, police teams have rushed to the spot to cordon off the area.

He also said, that is no loss of life.

A statement by the Defence Ministry said that the MiG-21 had taken off from the Indian Air Force’s Nal airbase in Rajasthan and that it was on a routine mission.

Today afternoon a MiG-21 aircraft on a routine mission crashed after getting airborne from Nal near Bikaner. Pilot of the aircraft ejected safely. Initial inputs suggest a bird hit. CoI will be investigating the cause of the accident.@PMOIndia @nsitharaman @PIB_India @IAF_MCC

Defence Spokesperson’s statement said, “Today afternoon a MiG-21 aircraft on a routine mission crashed after getting airborne from Nal near Bikaner. Initial inputs indicate the likely cause as bird hit after take off. Pilot of the aircraft ejected safely. A CoI (Court of Inquiry) will investigate the cause of the accident.”

In the recent times, the IAF has witnessed several crashes involving fighter jets and choppers.

Two Surya Kiran Hawks collided mid-air leading to the death of one pilot, during their rehearsals for the Aero Indian show held in Bengaluru.

On 27th February, Mi-17 chopper of the Indian Air Force had crashed at Budgam in Kashmir, killing all the six IAF personnel on board, along with a civilian.

Also, Wing Commander Abhinandan was apprehended by the Pakistan Military when the IAF pilot engaged with PAF when they tried to intrude in Indian airspace, with his MiG-21 Bison, resulting it being shot down across LOC.