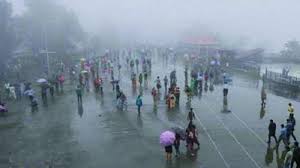 The Indian Metrological Department has issued red alert to India Indian states of Tamil Nadu, Kerala, and Lakshadweep over heavy to heavy rains for the upcoming four to five days. The cyclonic pressure formed over southeast Arabian Sea, adjoining Lakshadweep- Maldives region, a low pressure is likely to form over southeast Arabian Sea over the next 12 hours. Another low pressure area is likely to form over southwest Bay of Bengal and neighborhood around 8th October.

Flights to and fro Chennai are delayed due to the inclement weather condition. According to a private Met department, a depression is seen from Southwest Bay of Bengal across South Kerala and South Tamil Nadu by which moderate to heavy rains expected over south interior Karnataka.

Reviewing disaster preparedness, a meeting was held by the Disaster Management Authority officials on Thursday to monitor the water levels in dams considering the forecast. Also, Kerala CM has twitted over help from the Central Government for preparing for the inclement weather forecast.