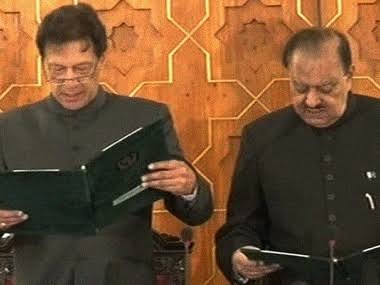 Pakistan’s 22nd Prime Minister Imran Khan took oath at a ceremony held at the President House in Islamabad on Saturday, a day after he claimed majority in the National Assembly, reported Times of India.

Khan,65, a cricketer turned politician outvoted Pakistan Muslim League-Nawaz President Shahbaz Sharif in the Prime Minister election on Friday during the confidence vote in the Parliament. He gained the support of the smaller parties and secured 176 votes. His rival Sharif had to be content with 96 votes.

The oath was administered by President Mamnoon Hussain.

Khan’s victory ended the rotating leadership between the ousted Pakistan Muslim League-Nawaz (PML-N) and the Pakistan Peoples Party (PPP), and the in-between periods of military rule.

An emotional Imran Khan took the oath to “bear true faith and allegiance to Pakistan”, and to “discharge my duties and perform my functions honestly, to the best of my ability… and always in the interest of the sovereignty, integrity, solidarity, well-being and prosperity of Pakistan.”

Khan who had promised during his election campaigns to pursue a strict stance on corruption, reiterated his promise after he won the majority votes on Friday.

He added in his first address to the Pakistan Parliament, “I promise my nation today that we will bring the tabdeeli (change) that this nation was starving for,” said Khan.”

“We have to hold strict accountability in this country; the people who looted this country, I promise that I will work against them,” promised Khan.

The former cricketer gained an international recognition after he led Pakistan cricket team to win the 1992 World Cup. He formed his party Tehreek-e-Insaf in 1996 and said after his victory that he has reached this stage after ’22 years of struggle’.